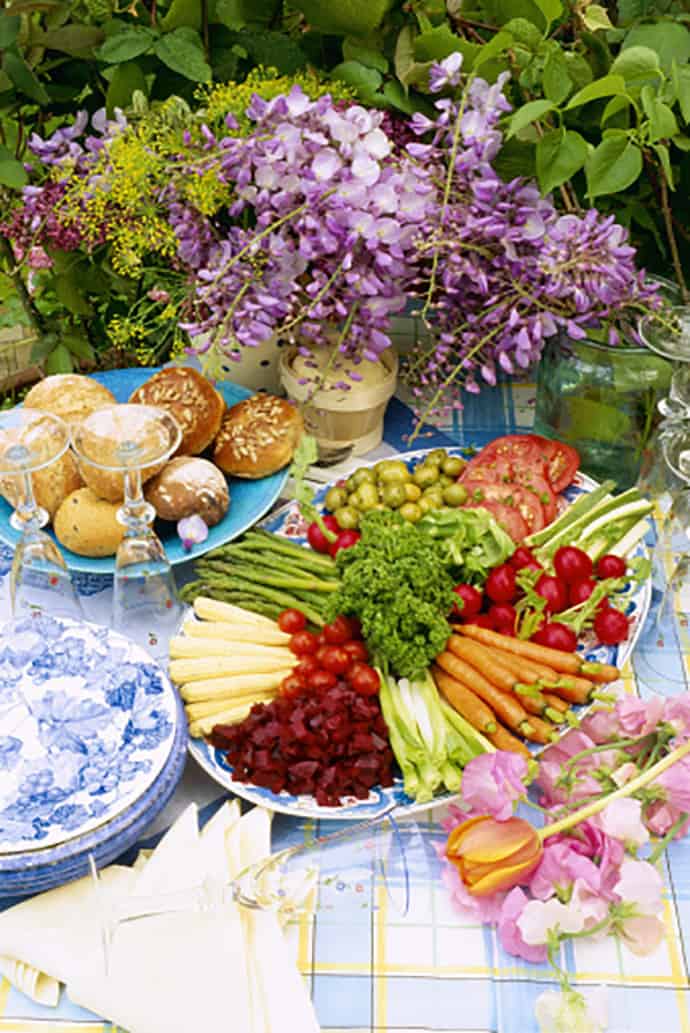 If you’re planning a gathering, chances are a crudité platter is on your list. Is always a favorite, pairs well with everything. and is rather simple to do.

While we seem to spend a lot more time on the showstopper foods for gatherings, the crudité platters should never be overlooked.

Here is a quick primer on preparing these delightful morsels that children and grownups alike always gravitate to.

Crudités are raw or lightly blanched vegetables that are frequently served as an accompaniment to dips. A bountiful array of crudités makes a colorful addition to a picnic, buffet table or cocktail party.

How to Trim Vegetables for Crudités

Asparagus
Trim asparagus by bending each spear until it breaks naturally. Then line the spears up on a cutting board and, using a chef’s knife, trim off the ends to create pieces that are the same length (about 5 inches long for crudités).

Bell Peppers
Using a chef’s knife, cut the bell pepper in half lengthwise. Using your fingers, pull out the stem and seeds, then cut away the white ribs with a paring knife. Using the chef’s knife, cut a thin slice off the top and bottom of each half, creating a rectangular length of pepper that can easily be cut into sticks. Flatten each pepper half with your fingers, then cut the pepper lengthwise into sticks about 1/2 inch wide.

Broccoli
Using a chef’s knife, trim away any remaining leaves on the broccoli stalk, then cut off the bottom portion of the stalk. (If desired, peel the lower portion and cook it later for another dish.) Using a paring knife, cut the broccoli head into individual florets, each about 1 3/4 inches long. If the floret stems seem tough, peel them with the paring knife.

Carrots
Using a vegetable peeler, remove the tough skin. Using a paring knife, trim off the leafy tops and rootlike ends. Cut the carrots crosswise into 2 or 3 uniform lengths, each about 3 inches long. Using a chef’s knife, cut the carrot pieces lengthwise into thirds, each about 1/2 inch wide. Then cut each piece lengthwise into sticks, spacing the cuts about 1/2 inch apart.

Cauliflower
Using a chef’s knife, cut the head of cauliflower in half vertically to reveal the core. Using a paring knife, cut out the inner core and trim away any green leaves. Cut the cauliflower head into florets, each about 1 3/4 inches long. If the floret stems seem tough, peel them with the paring knife.

Celery
Using a chef’s knife, cut trimmed celery stalks crosswise into 2 or 3 uniform lengths, each about 3 inches long. Then cut the celery pieces lengthwise into sticks, spacing the cuts about 1/2 inch apart.

Cucumbers
To make fluted cucumber slices, use a vegetable peeler to create stripes of dark green peel and light green flesh. Using a chef’s knife, cut the cucumber crosswise on the diagonal into slices 1/4 inch thick.

Green or Yellow Beans
Using your fingers, break off the tough stem ends of the beans where they were attached to the plant. Most green beans have no strings, but if you do find one attached to the stem end, pull it along the length of the bean to remove it. Leave the pointed tail ends intact.

Blanching Vegetables for Crudités
Some vegetables benefit from a quick immersion in boiling water to soften their texture before serving them as crudités. These include asparagus, broccoli, cauliflower, and green or yellow beans.

Bring a large pot three-fourths full of water to a boil over high heat. Add about 2 tsp. kosher salt and the vegetables.

As soon as the vegetables are crisp and barely tender, remove them with a skimmer or slotted spoon. Drain smaller vegetables in a colander.

Immediately transfer the vegetables to a bowl of ice water to stop the cooking and set the color, a technique known as shocking.

Drain the cooled vegetables and pat dry with a kitchen towel or paper towels.