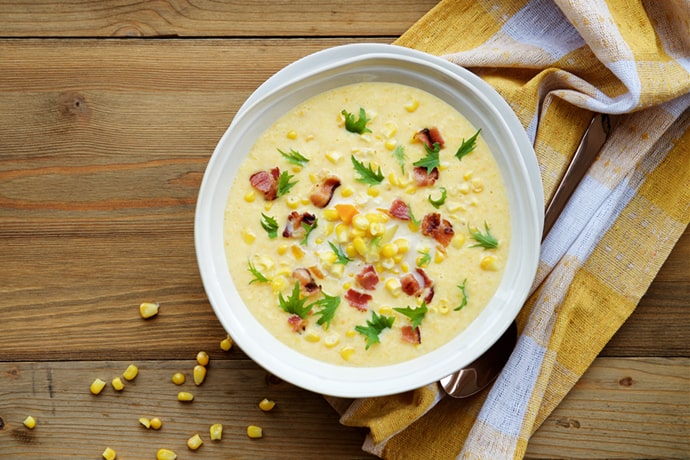 Farmers’ Market Corn Chowder. It’s not summer without it. Loaded with corn, thick with chunks of potato, celery, and carrots, flavored with smoked bacon, corn chowder is summer cooking at its best.

This hearty summer soup is a seasonal essential — even when the temperatures soar.

As the corn stalks grow in the fields near my house and the farmers’ market bins begin to fill with local corn, this soup is never far from my mind.

Saturday mornings often find me at our local Farmers’ Market where from mid-July, I can never resist the corn. While I grill it and boil it, and make salad and bread from it, I still have leftovers. And those coveted leftovers become this delicious, robust soup filled with the summer’s best veggies.

As the calendar turns toward August, this corn chowder finds its way onto our menu again and again. And yes, even through September. For me… it’s just one of the flavors of summer you want to hold onto.

While this soup is a simple corn chowder, I do take the time to boil the cobs in the broth to boost the flavor and enrich it with that quintessential corn flavor. 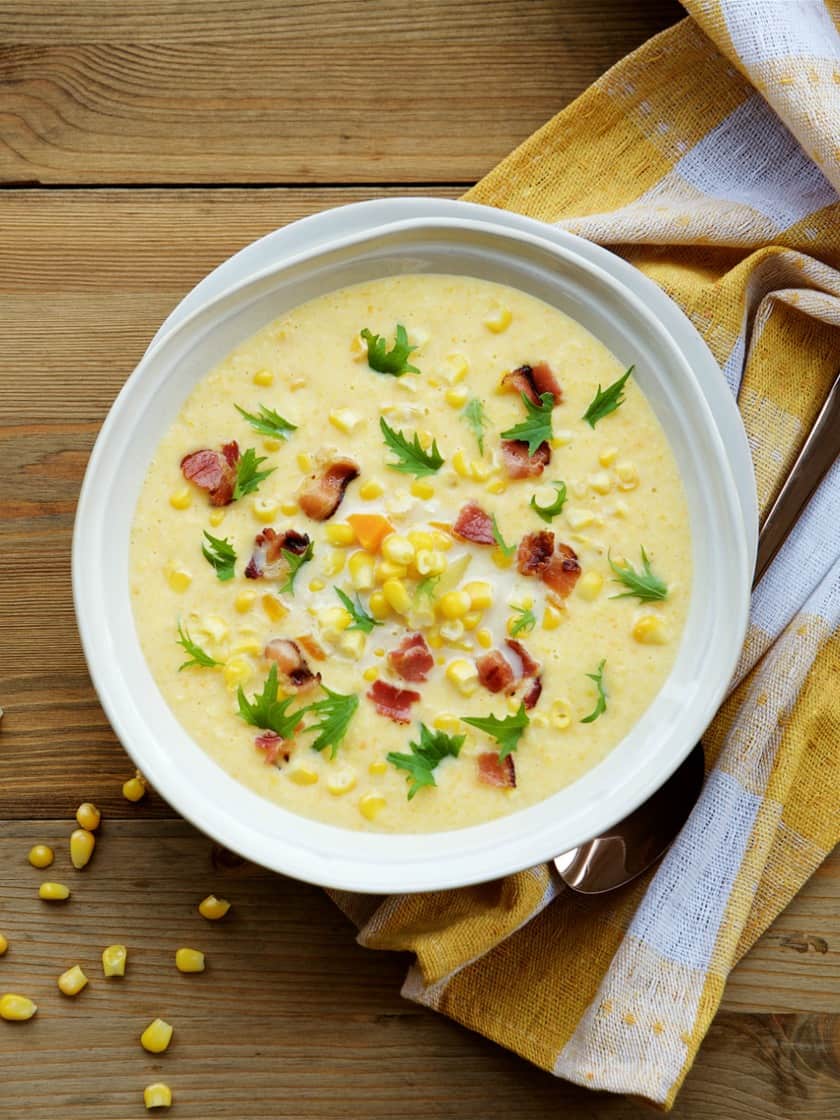 Farmers’ Market Corn Chowder. It’s not summer without it. Loaded with corn, thick with chunks of potato, celery, and carrots, flavored with smoked bacon, corn chowder is summer cooking at its best.

Corn: Shuck the corn, remove the silk, and with a sharp knife, cut off the stem so the cob has a flat surface to stand vertically. Slice the corn kernels from the cob. Break each corn cob in half and reserve.

In a medium stockpot bring the corn cobs and chicken stock to a boil. Reduce the heat and simmer for at least 10 minutes, preferably 15 to 20 minutes.

Meanwhile, heat a large stockpot over medium heat; add the chopped bacon and cook until brown, about 5 minutes. Remove the bacon; pour off all but 1 tablespoon of the drippings. Then saute the onion, carrots, celery, and pepper until soft, about 8 minutes.

Remove the cobs from the broth and discard. You will need 3 cups of broth for the soup. Add water as necessary to measure 3 cups. Most often I need to add an additional 1 cup of water.

Add the broth and red pepper flakes to the veggies along with the chopped potato, reserved corn kernels, and bacon. Season with salt and pepper to taste. Bring to a boil; then reduce and simmer 10 minutes more, or until the potatoes are soft. Remove from the heat; stir in the milk and add the fresh thyme and oregano sprigs.