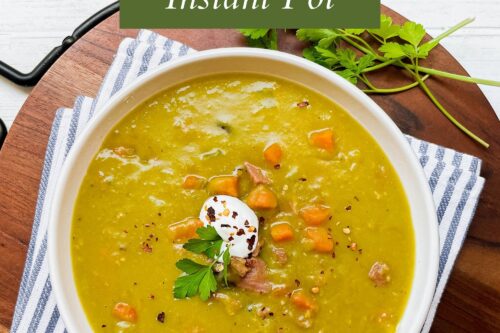 This Instant Pot Split Pea Soup, made with ham, is a quick and easy method to making this oh-so-yummy bowl of comfort. Perfect all year with simple ingredients, it’s ready in about 30 minutes, and is utterly delicious!

While I absolutely love to make this soup following a holiday (like Easter or Christmas), it might be my tradition even, I also adore making it year round.

This recipe doesn’t require a ham bone (although please, if you have one… use it in this soup!) You don’t even absolutely need leftover holiday ham.

If you’re craving a quick and easy bowl of split pea soup… this recipe works. Simply omit the bone and swap in thick slice deli ham.

Beans, peas, and lentils are a group of vegetables called “pulses.” Belonging to the legume family, pulses are any vegetable grown in a pod. Pulses are identified as the “dry edible seed within the pod.” Which includes split peas.

Colorado State University says that split peas are a great source of plant based protein. And a “1/2 cup of cooked split peas contains about 115 calories, 8 grams of protein, and 8 grams of fiber. They are also low in fat, and a good source of folate, iron, and potassium.”

How Can I Use a Ham Bone?

One of the benefits of holidays is the leftovers. If you’re serving ham, likely you have a ham bone. If you’re not sure what to do with it… make soup!

Using a ham bone in soup is a simple way to bring incredible flavor, infuse the soup with marrow and gelatin which both thickens the soup as well as providing tremendous health benefits similar to bone broth.

It is especially delicious in White Bean Ham Bone Soup or with Split Pea Soup, like this easy Instant Pot recipe.

If you don’t have time to use the bone right away, freeze it for later use!

What if You Don’t Have a Ham Bone?

This recipe doesn’t require a ham bone, it’s simply a delicious addition. The ham in the recipe can be cooked leftover ham from the holidays or thick-cut diced ham or even slices of deli ham.

The exact measurements for this soup are in the recipe card at the bottom of this post. Here’s the simple list of ingredients you will need:

You may have noticed there is no added salt in the ingredient list. Because sodium varies in ham, I left out a specific measurement for salt. Once the soup is cooked, taste and season with salt and pepper to taste. Most often, I do not add additional salt to the soup.

This soup is incredibly easy to make.

Begin by sauting the vegetables in butter (or oil of choice). Once softened, add the remaining ingredients into the pressure cooker.

Cook for 15 minutes, then let the pressure release naturally for 10 to 15 minutes. Remove the ham bone if used, and serve.

This Instant Pot Split Pea Soup doesn’t require any garnishment, it’s flavorful all on its own. But, if you want to dress it up a little, a dollup of sour cream (or creme fraiche), chopped fresh parsley, and red pepper flakes add another layer of flavor.

Refrigerate leftovers in an airtight container. They will keep for 4 to 5 days. For longer storage, freeze for up to 5 months.

Because ham varies, I don't add salt to the soup until it's cooked. Most often, I don't add any additional salt, but taste and season as needed.

Refrigerate leftovers in an airtight container. They will keep for 4 to 5 days. For longer storage, freeze for up to 5 months.

How to make the soup on the stovetop:

Sauté the vegetables in a large soup pot or Dutch oven. Once softened, add the remaining ingredients to the pot and bring to a boil. Reduce the heat to a simmer, cover, and cook until the peas are soft; about 1 hour. You may like to take a look at my White Bean Ham Bone Soup recipe.