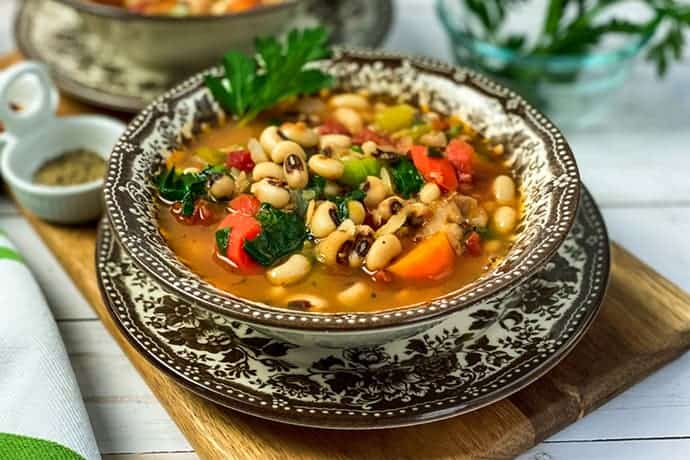 New Year’s Day Black-Eyed Peas Soup, a hearty comfort food with ancient traditions, is packed with vegetables, robust in flavor and offers a healthy start to the new year.

“According to a portion of the Talmud written around 500 A.D., it was Jewish custom at the time to eat black-eyed peas in celebration of Rosh Hashanah, the Jewish New Year.” The tradition may have arrived with the Sephardic Jews arriving in Georgia in the late 1730s. 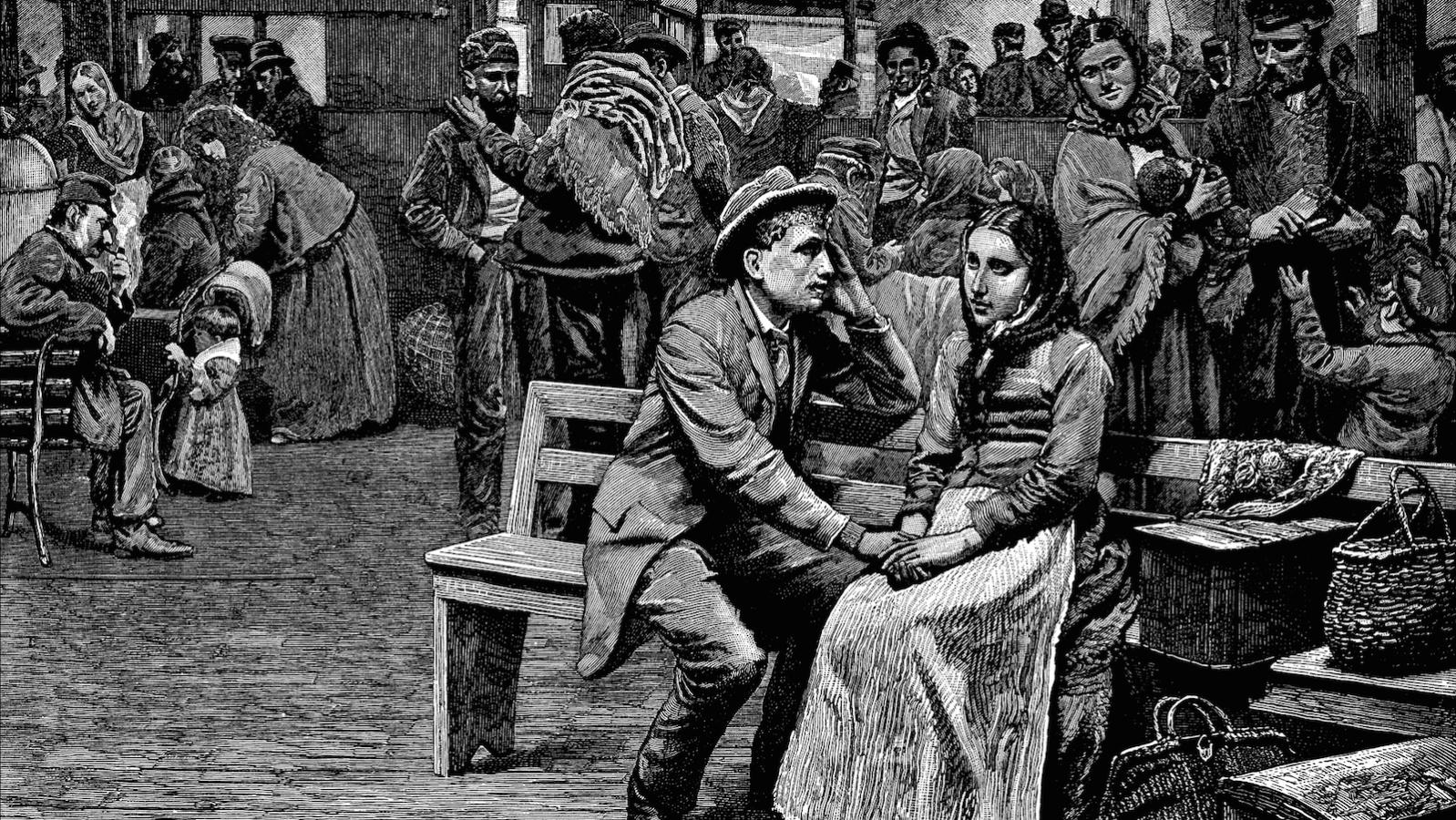 A Healthy Start for a New Year

Collards: The Washingtonian says “they’re extremely low in calories (35 calories in half a cup of cooked greens) and are rich in folate, calcium, dietary fiber, and vitamins E, A, K, and C. Thanks to their many nutrients, collard greens have been associated with cancer prevention, detox support, anti-inflammatory properties, heart health, and digestive support.” 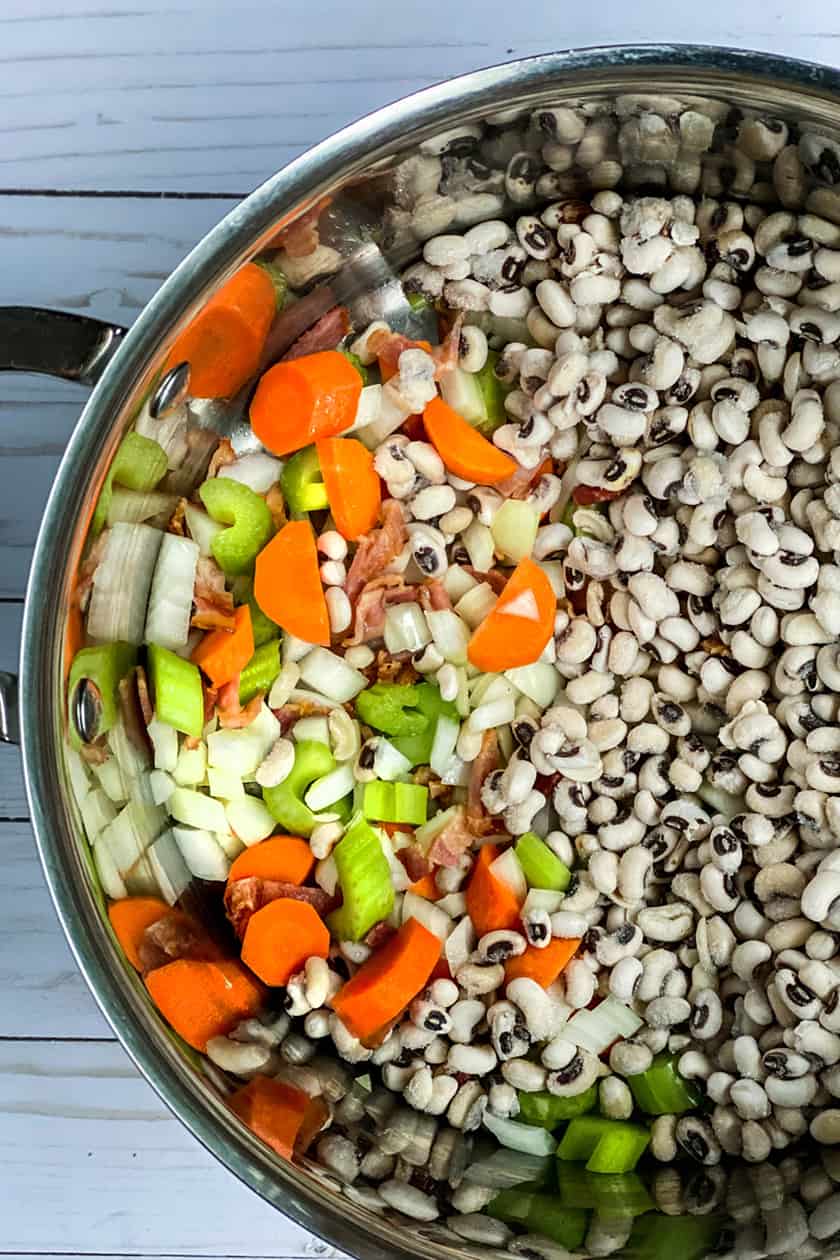 Long a tradition in the South, it’s been said that New Year’s Day Black Eyed Peas Soup will bring good luck, health, and prosperity in the coming year.

It’s also been said that consuming these legumes demonstrate humility and a lack of vanity. “The humble nature of the black-eyed pea is echoed by the old expression, ‘Eat poor on New Year’s, and eat fat the rest of the year.’ 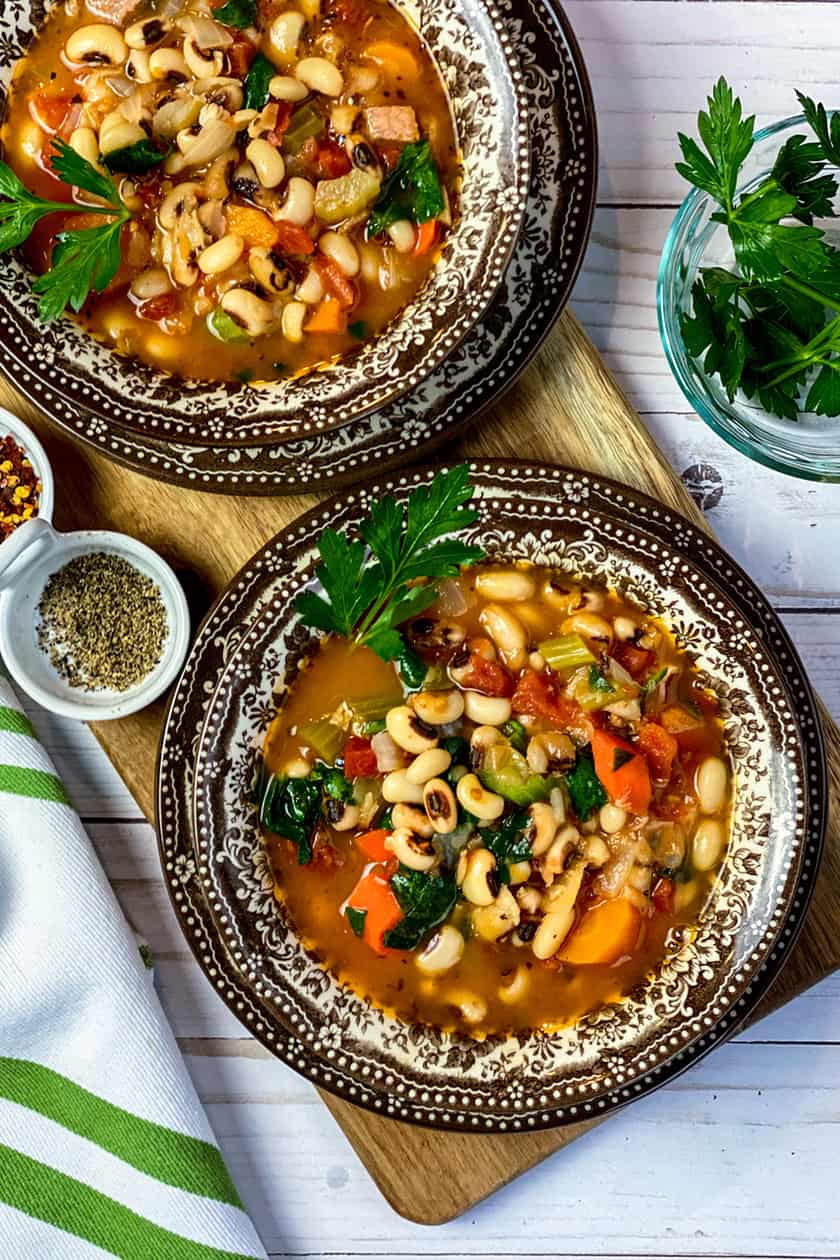 Still, others say these dried beans resemble coins. Others say that because the peas expand during cooking, it symbolizes expanding wealth.

I’m not sure about luck or prosperity, but how can you go wrong with delicious black-eyed peas and collards or other greens?

In this recipe, I’m using frozen black-eyed peas found in the freezer section of most markets. However, if you want to use dried beans or canned beans, there are instructions in the recipe card below.

I like frozen peas because it cuts the cooking time in half.

While collards are the traditional green used in comfort food soup, you can easily substitute fresh spinach or kale too. 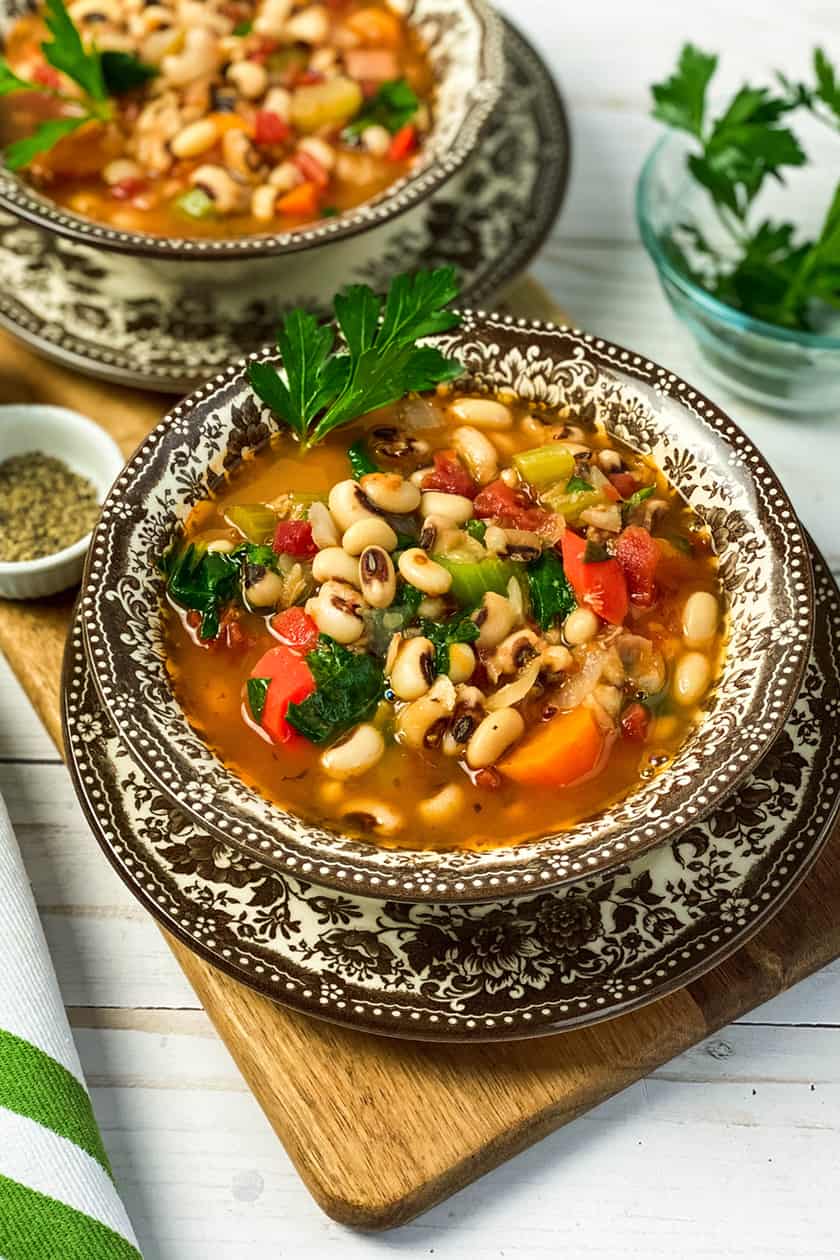 If Using Dried Black Eyed Peas: Use 2 lbs of dried peas, rinsed and drained. Add to the pot with the broth, seasoning, and tomatoes. Bring to a boil, cover, and simmer about 1 hour. Then add 6 cups of water, return to a boil, and simmer for another hour, or until the peas are soft. Add the spinach and cook until wilted. Total cooking time should be 2 1/2 hours or longer.

If Using Frozen Black Eyed Peas: Use 2 12-ounce bags of frozen peas. Add the frozen peas to the pot along with the broth, seasoning, and tomatoes. Bring to a boil, cover, and simmer about 45 minutes. Remove the cover and add water as needed for consistency along with chopped spinach. Heat through and serve.

For Canned Black Eyed Peas: Use 3 to 4 cans of drained and rinsed black eyed peas. Add to the pot with the broth, seasoning, and tomatoes. Bring to a boil, cover, and cook until the vegetables are soft; about 15 to 20 minutes. Add the water as necessary for consistency. Just before serving, add the spinach and cook until wilted. 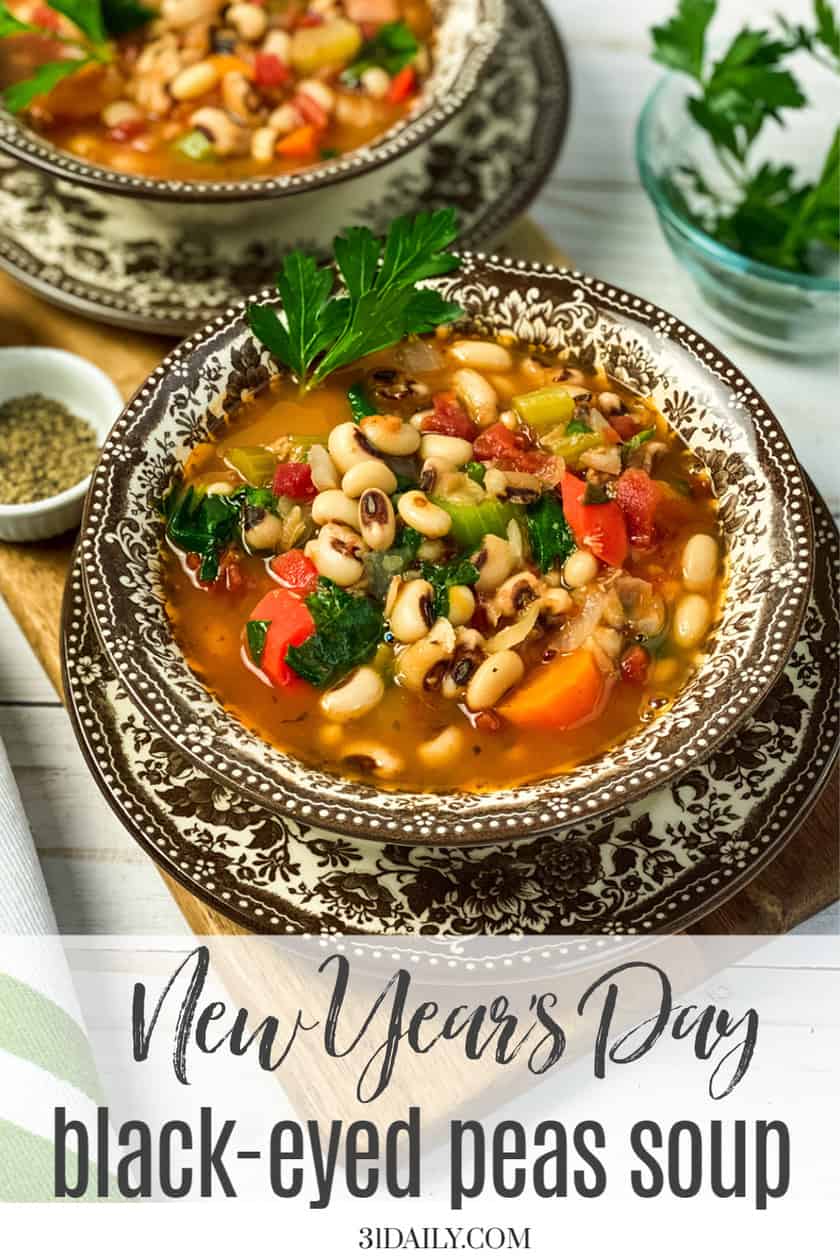