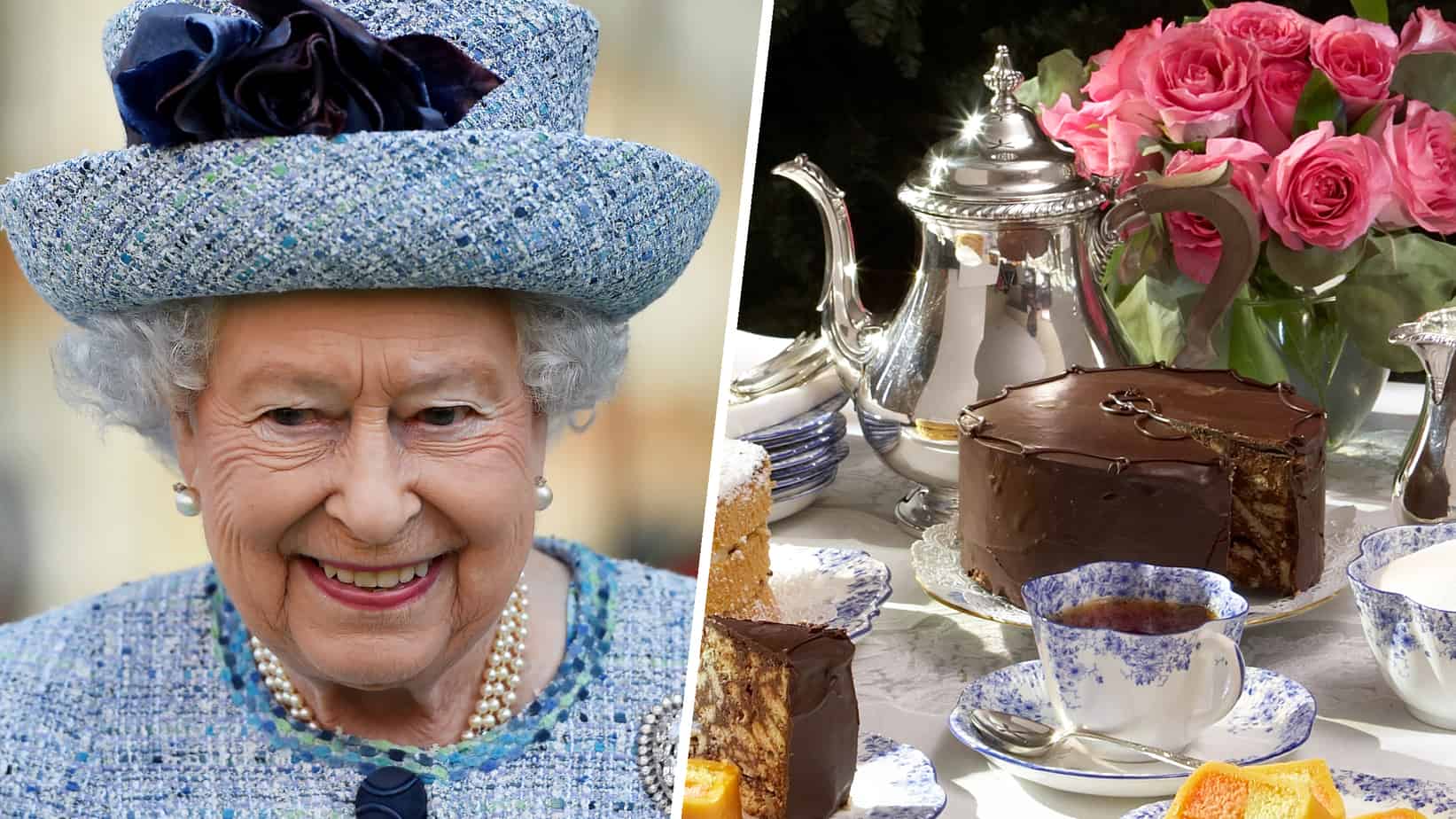 If serving an Afternoon Tea fit for a Queen is what you have in mind, we’ve gathered some of Queen Elizabeth’s favorite afternoon tea recipes. Along with royal guidance on how to properly drink tea, whether or not to raise your pinky, and an answer to an age-old debate over tea before milk.

Continue reading to view Queen Elizabeth Afternoon Tea recipes, her preferred tea, and how she likes it brewed and served. 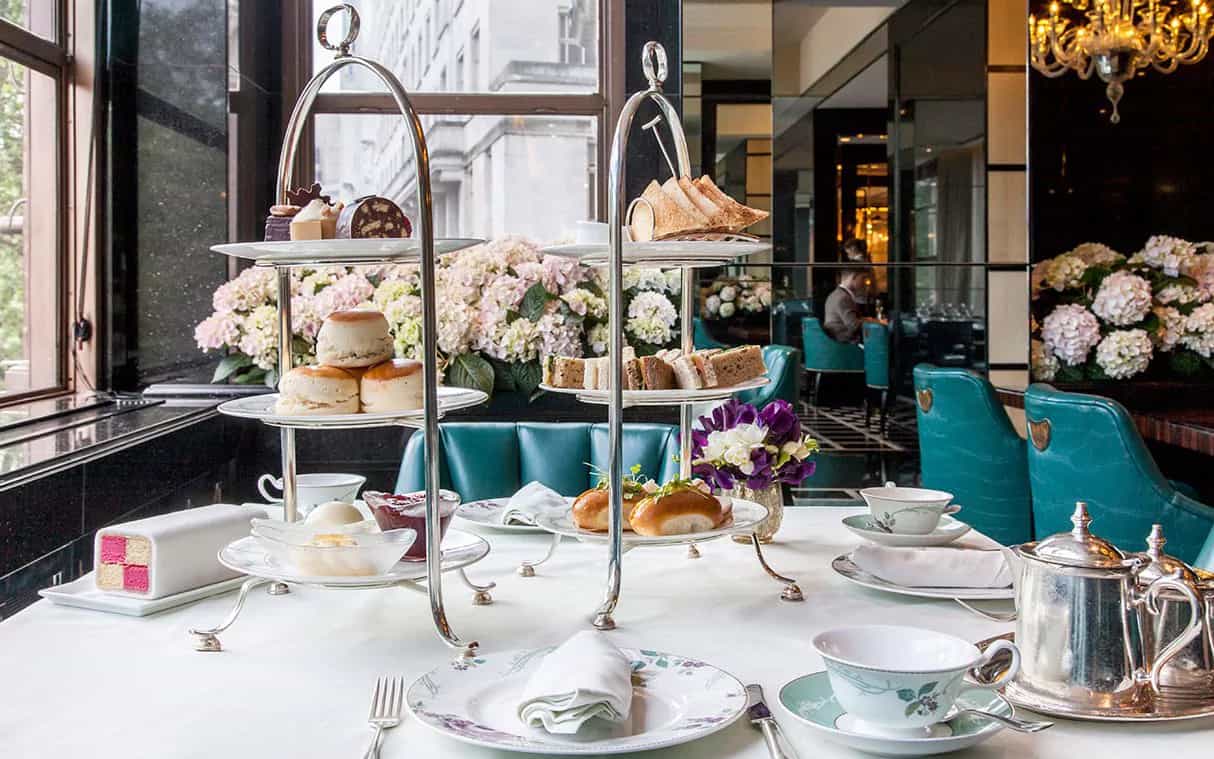 He said, “Such an event is a more formal affair where the tea must be brewed just-so, the cream cakes filled with seasonal British fruit and the jam sandwiches cut into the shape of old English pennies.” (Recipe below). 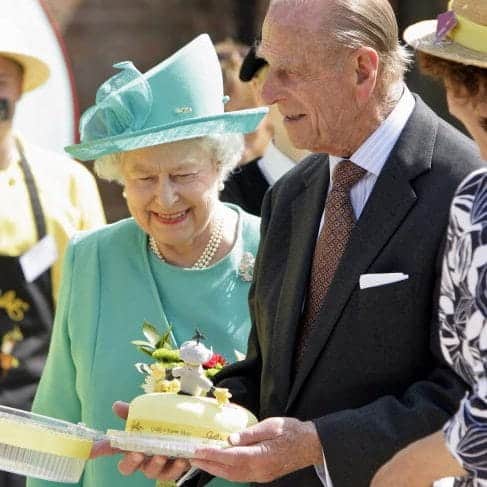 “Every day,”  Darren McGrady, former personal chef to Queen Elizabeth, says, “she would have what we called a ‘cut cake’ – meaning she would cut a slice of it off – small cakes like eclairs or raspberry tartlets, and then scones: one day plain, the next day fruit. And two types of sandwiches: smoked salmon, or Sage Derby cheese and tomato, roast beef or jam pennies.

On Tea: Does The Queen Pour the Milk in Before the Tea? 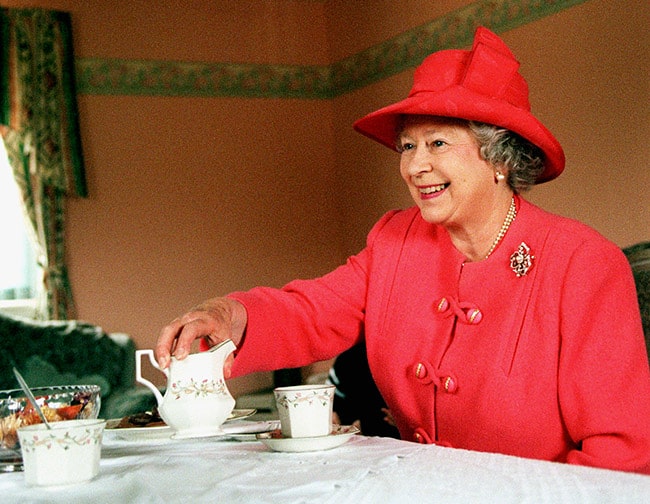 “The British royal family love their tea as much as the rest of the nation! But where does the Queen stand on the age-old debate about whether you pour the milk in first, or the tea? Her Majesty’s royal butler Grant Harrold shared an insight into the Queen’s favourite tea and how to prepare the perfect brew. Drumroll please… the monarch is a fan of Assam and Earl Grey, and will always add the milk after the tea,” Hello! Magazine says.

Mr. Harrold has told the BBC that it’s a “myth that members of Royalty use their pinky when drinking, I have never seen that happen once.”

He further explains the “‘correct’ way to make tea is to stir it back and forth never in a circle and never with the spoon touching the sides.”

Lastly, he advises, one should always sip delicately from your cup and never slurp. 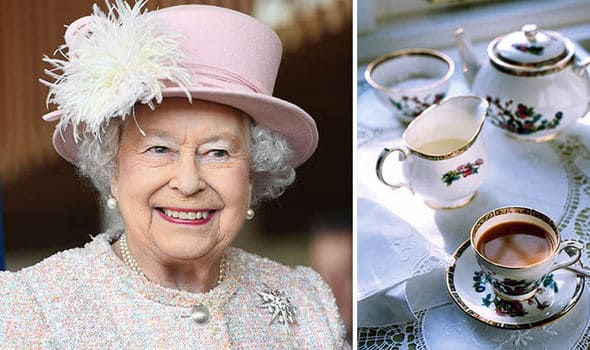 Queen Elizabeth and Her Favorite Tea

If you want to serve tea as Queen Elizabeth prefers, you’ll want to have a pot of Earl Gray or Assam ready.

Her Majesty’s royal butler, Grant Harrold, says the Queen “enjoys her Assam or her Earl Grey the traditional way, made with tea leaves in a teapot and poured into a fine bone china teacup. She will also use a strainer.” 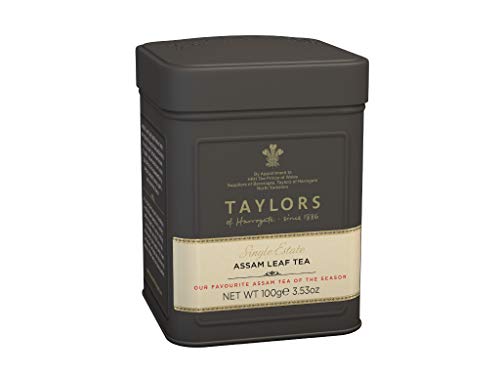 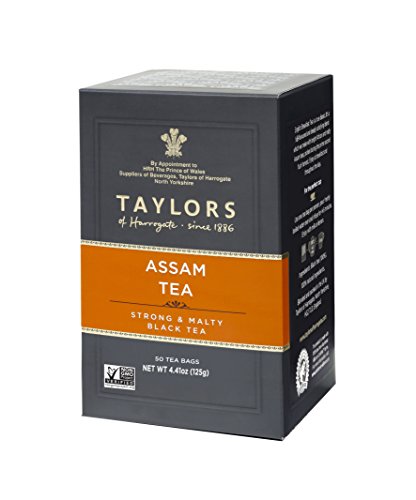 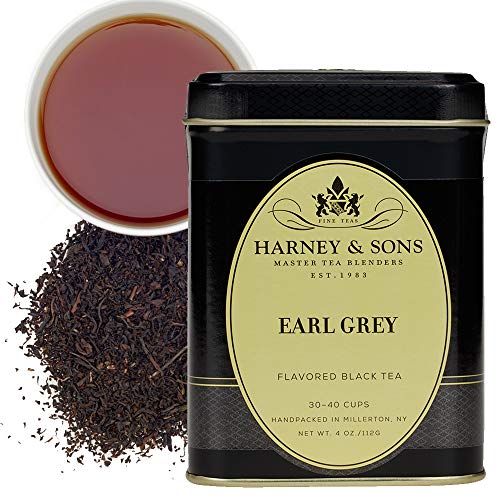 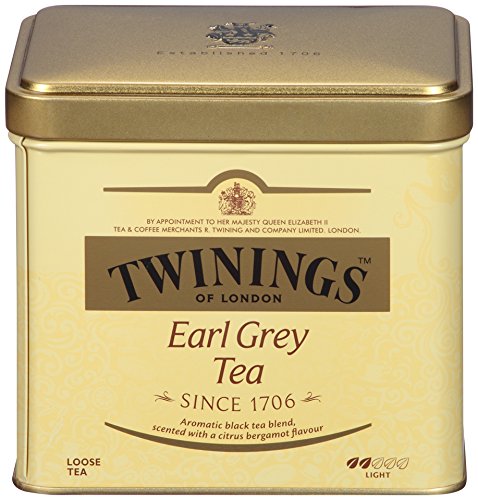 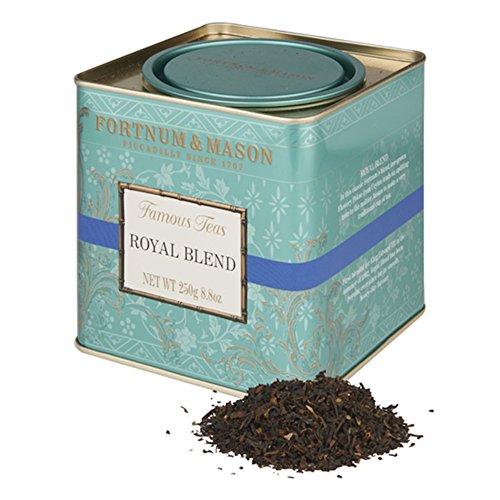 Royal tradition says Afternoon Tea is celebrated “between 3 pm and 5 pm with an assortment of cakes, pastries, dainty sandwiches and, of course, scones with clotted cream, curd, and strawberry preserves.”

Royal Afternoon Tea is “served from elegant silver teapots into fine bone china teacups, Afternoon Tea and Cream Tea were set on low tables as the ladies relaxed in comfortable parlour chairs or in the garden.”

Etiquette When Invited to Afternoon Tea with the Queen 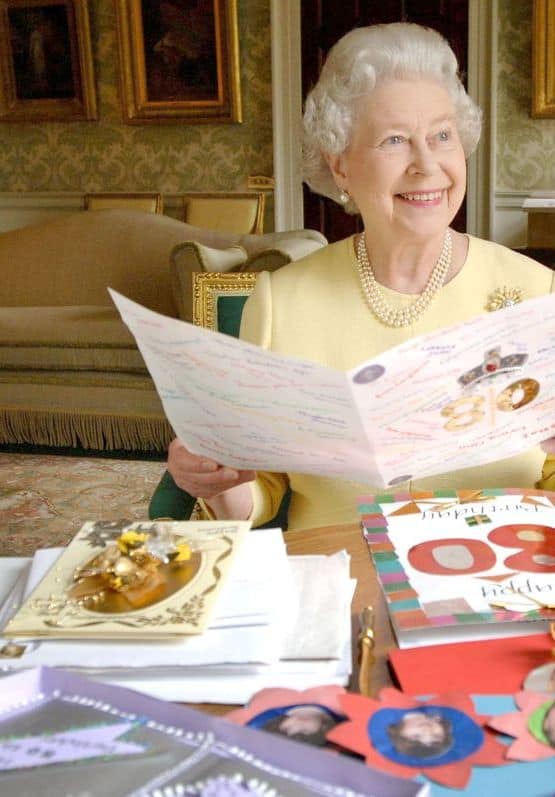 Every year, Queen Elizabeth celebrates her birthday, twice. She was born on April 21, 1926, and celebrates privately with her family.

Her official birthday is celebrated the seconds Saturday in June with “Trooping the Colour” also known as the Queen’s Birthday Parade.

The Mall outside Buckingham Palace “is filled with flag-waving, Union Jack-clad merrymakers, all gathered to watch the official Trooping the Colour celebrations.”

This year, due to shelter restrictions, a “small, brief military ceremony” will take place at Windsor Castle on Saturday, June 13, a spokesman for Buckingham Palace has confirmed. Britons will be able to watch the replacement celebrations on BBC One this Saturday from 10:15 am.

In honor of her 94th birthday, her chefs shared a chocolate cupcake recipe on Instagram, complete with a little decorating inspiration.

???Happy birthday to Her Majesty! To celebrate The Queen’s birthday we are sharing a chocolate cupcake recipe from The Royal Pastry Chefs. If you or a loved one are celebrating a special occasion during isolation why not treat yourself to some #RoyalBakes? Remember to share your creations with us! Ingredients for the cake sponges – (serves approximately 15) 15g vinegar 300ml milk 50ml vegetable oil 60g butter (melted and cool) 2 eggs 5ml of vanilla essence 250g of self-raising flour 75 of cocoa powder 300g caster sugar 10g bicarbonate of soda 100g white chocolate chips cupcake cases Ingredients for the buttercream topping: 90g of high percentage dark chocolate 100g butter 125g icing sugar Option to also use Royal icing, instead of buttercream: Royal icing available pre made in shops Add food colouring to create different colours Cake sponge method: -Preheat the oven to 150 C -Combine the flour, sugar, cocoa powder and bicarbonate of soda into a mixing bowl -Whisk the eggs in a separate jug, with the vanilla essence, melted butter, oil, milk and vinegar -Slowly add the wet mixture into the dry mixture, little by little -Ensure the batter is smooth with no lumps -Finally add the chocolate chips (alternatives could be nuts, dried fruit) -Lay the cupcake cases onto a tray -Use a metal spoon to equally divide the mixture into the cases -Bake for around 15-18 minutes, take out of the oven when golden and springy on touch -Leave to cool Buttercream icing method: -Cream the sugar and butter together, until light and creamy -Add in the warm melted chocolate -If you have a piping bag to hand, pipe the icing on the top of cakes for decoration (otherwise gently use a teaspoon or small spatula to ice) Royal icing method: -If decorating with royal icing, roll the icing out and cut into circular disks -Lay the disc over the cupcake and mould to required shape We hope you enjoy! #RoyalBakes ? 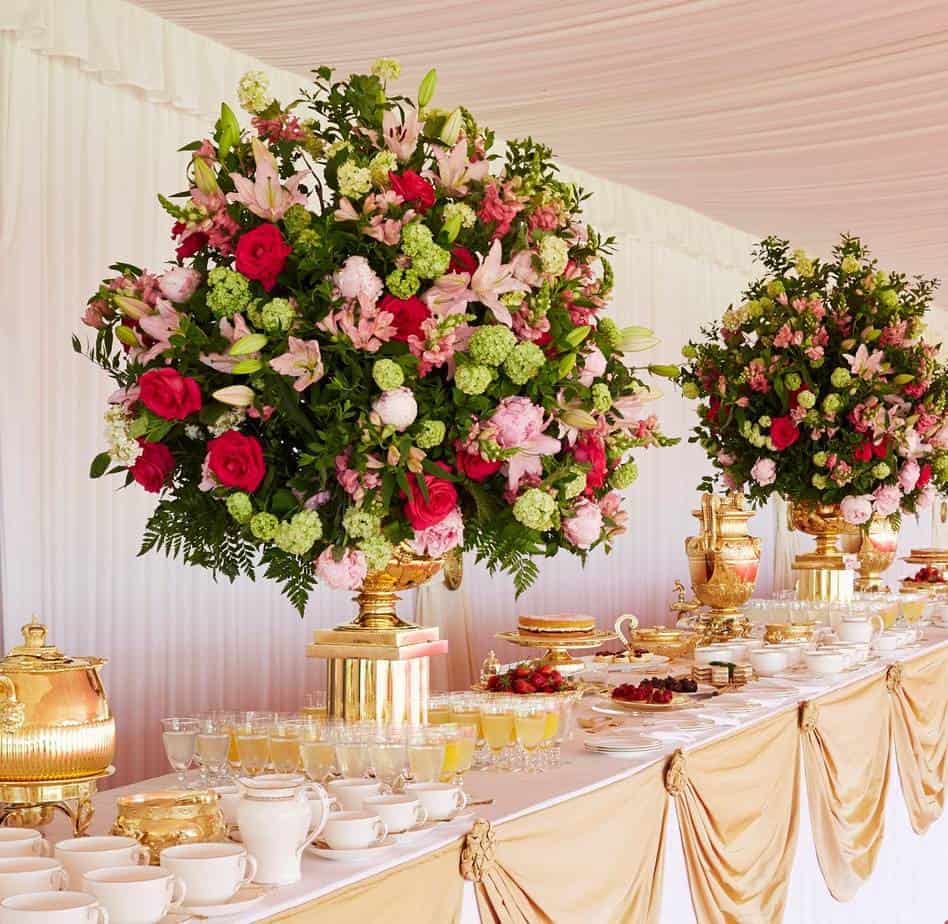 As an Amazon Associate, I earn from qualifying purchases at no additional cost to you.

There are two cookbooks every tea library should have. Both contain authentic recipes The Queen loves, has made herself, or was made for her by her personal chef. 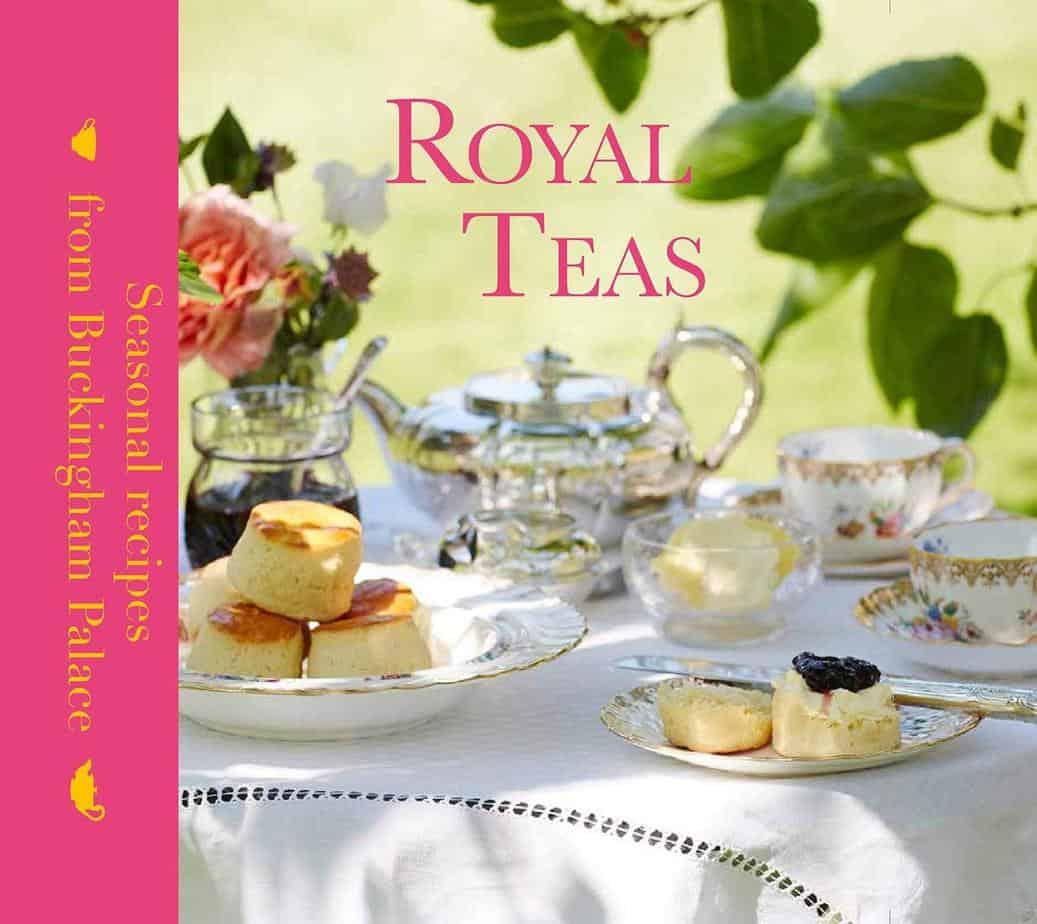 “What could be more quintessentially British than a spot of afternoon tea? It’s a hallowed tradition that’s taken particularly seriously at Buckingham Palace, where for more than a decade Royal Chef Mark Flanagan and his team have prepared an afternoon tea that reflects the best of this venerable tradition across the seasons, from springtime picnics to sophisticated summer garden parties and festive Christmas teas.” 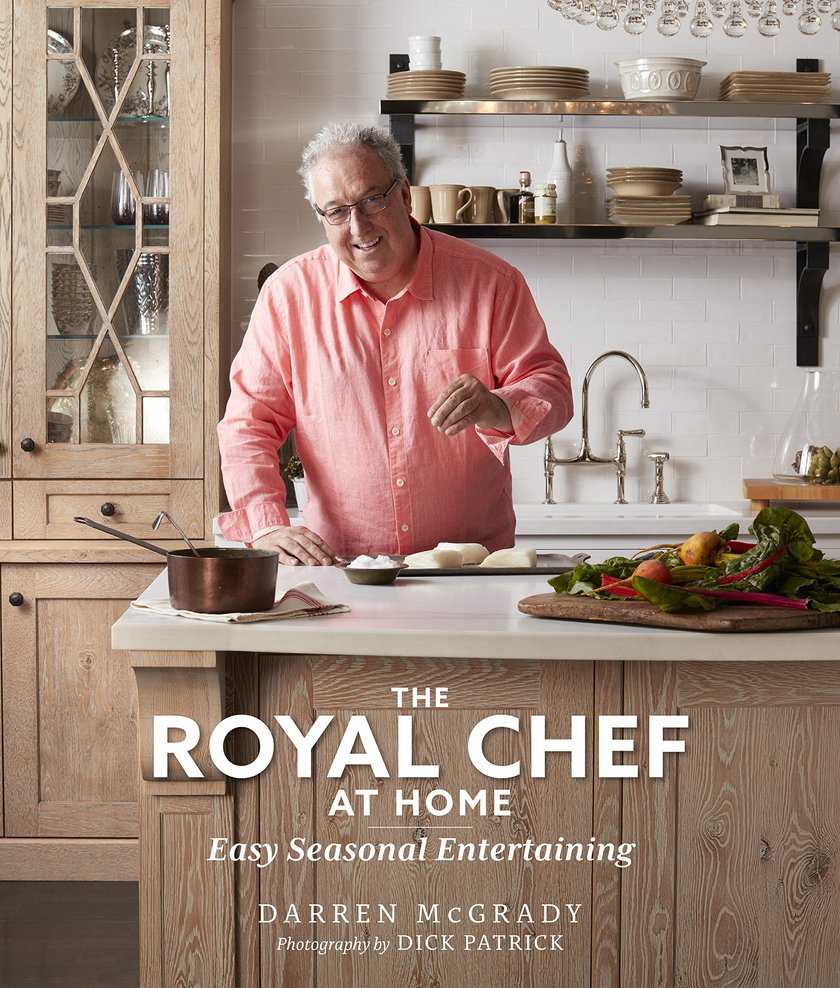 Darren McGrady, former personal chef to Queen Elizabeth II and Princess Diana, has curated and created delicious, easy recipes that will add an elegant touch to any meal without requiring hours of laboring in the kitchen.

“Darren’s Easy Seasons is perfect for entertaining no matter what the time of year, including midday lunches and brunches, teas, indoor and outdoor sit-down and buffet dinners, and cocktail parties. The book is also organized by season with events including a Children’s Easter Egg Roll, Valentine’s Day for Two, a proper Sunday dinner, Christmas open house, and Thanksgiving.” 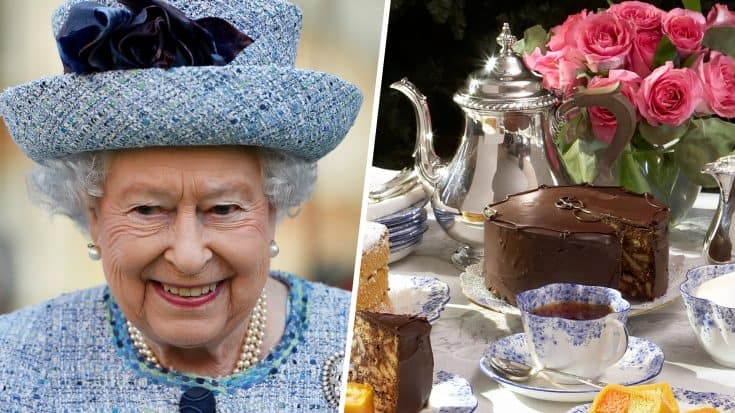 "'This chocolate biscuit cake is Her Royal Majesty the Queen's favorite afternoon tea cake by far,' chef Darren McGrady, The Royal Chef and former personal chef to Queen Elizabeth II," said. "This cake is probably the only one that is sent into the royal dining room again and again until it has all gone." 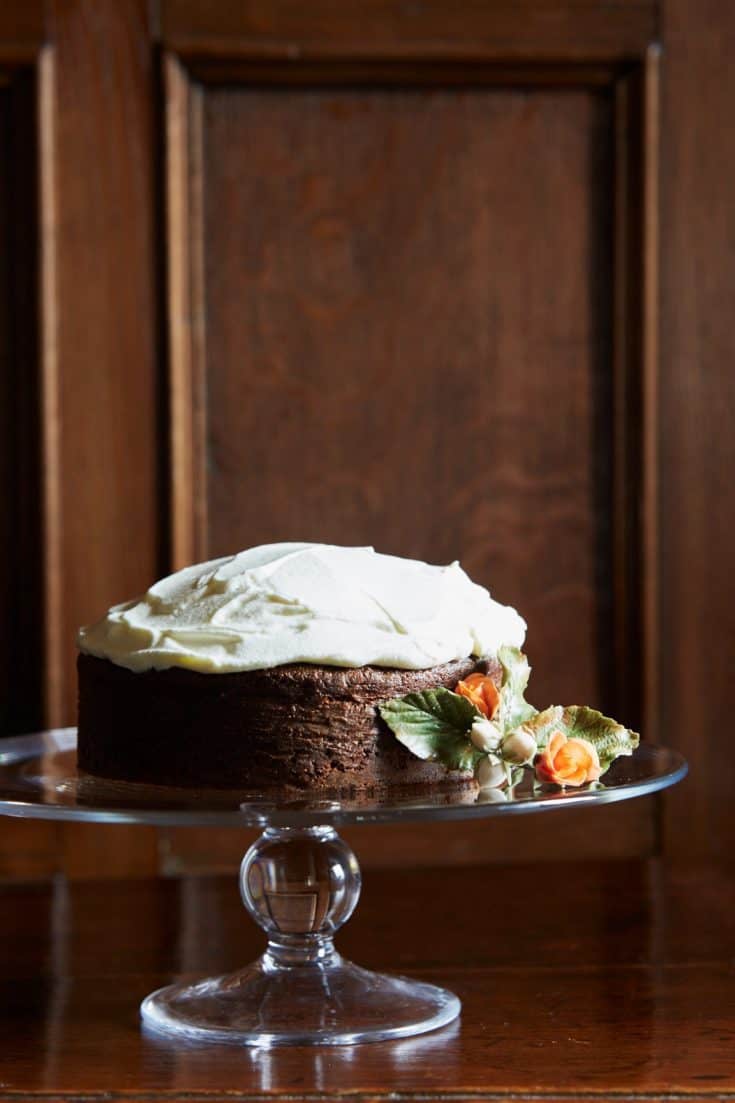 "This is a dark, spicy cake, deliciously moist and very moreish." 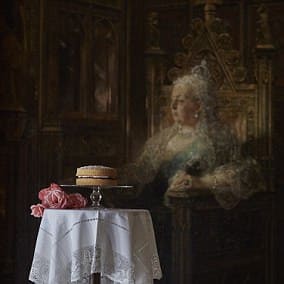 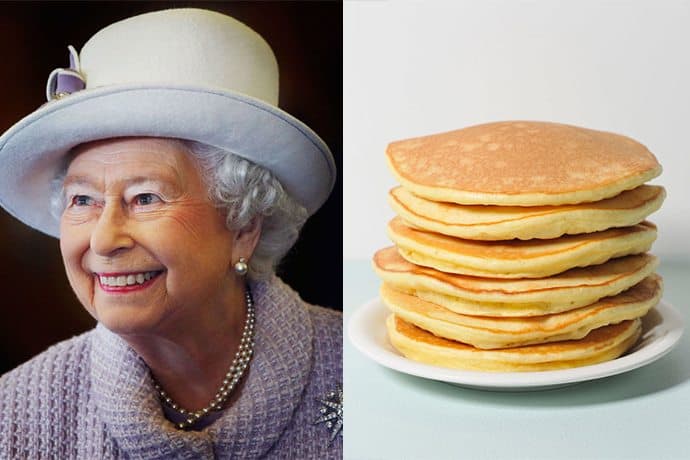 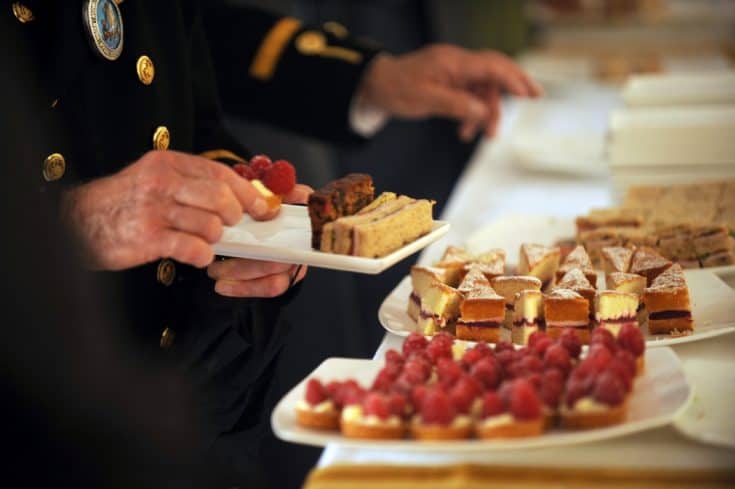 A Royal Recipe for fruit scones

"The Royal Pastry Chefs are happy to share their recipe for fruit scones, which traditionally would be served at Buckingham Palace every summer." 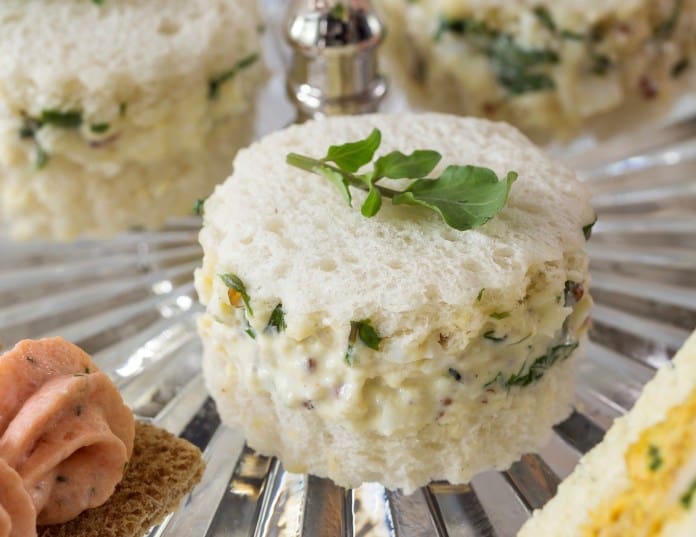 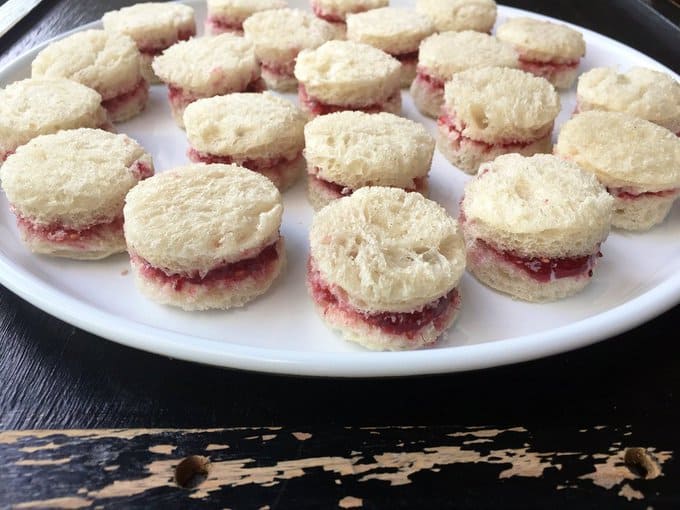 "Teatime consists of a ‘penny’ - With their tea, the family really enjoys a sandwich called “jam penny.” The food got its name because it is cut into circles the size of an old English penny."

For a sweet treat at tea, she may ask for her childhood favorite – jam pennies, tiny raspberry jam sandwiches cut into small circles the size of an old English penny. She used to snack on them with her little sister Princess Margaret in the nursery as kids, according to the Telegraph. 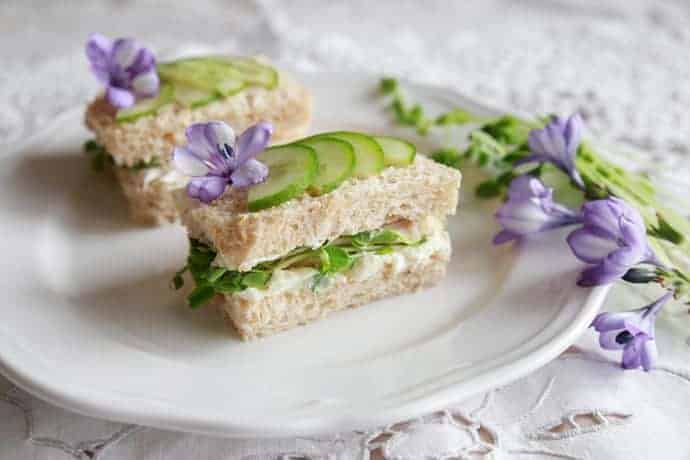 The Queen always asks for at least two kinds of sandwiches with her afternoon tea. Often she chooses cucumber, smoked salmon, egg with mayonnaise, ham and mustard, or tuna. The bread is always either whole wheat or white bread, sliced thinly, and cut into squares with the corners cut off similar to an octagon-like shape. 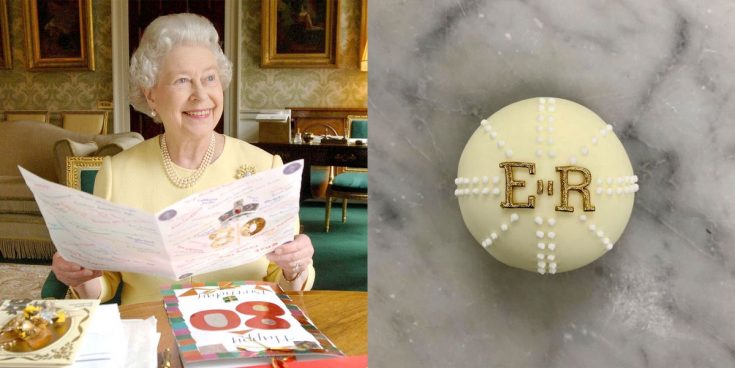 In honor of the British monarch's 94th birthday today, her chefs shared a chocolate cupcake recipe on social media, complete with a little decorating inspiration.