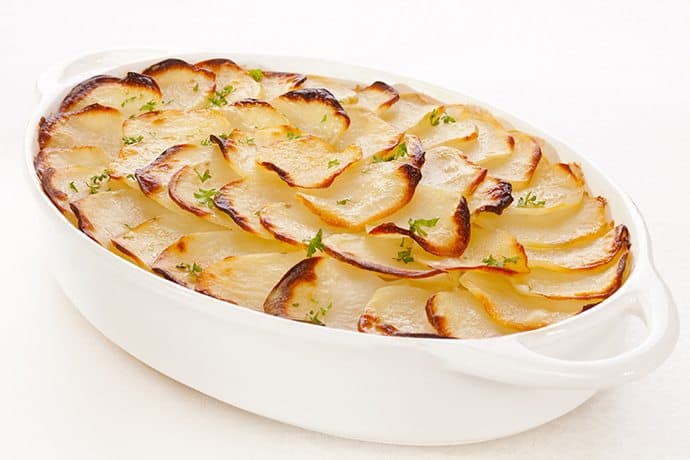 The dish is reputed to be of the Napoleonic era and is most commonly credited to Adolphe Dugléré, chef to the Rothschild family and manager at Les Frères Provençaux at the Palais-Royal from 1848 to 1866.

How is Potato Anna Made?

Traditionally, Potato Anna is baked and browned in a skillet and then turned out onto a serving platter and cut into wedges.

In fact, A special double baking dish made of copper, called la cocotte à pommes Anna, is still manufactured in France. It’s made with two halves that fit together and easily allows the cook to invert the dish during cooking.

Preheat oven to 425-degrees. Brush an 8-inch skillet or baking dish with butter.

Thinly slice potatoes to 1/8-inch thickness. Using a mandoline makes this job much easier, giving the potatoes a uniformity.

Begin overlapping potato slices around the edges of the skillet or baking pan and then fill in the center. Season with salt and pepper, fresh thyme leaves and drizzle with about 1 tablespoon of the butter. Repeat this layering process (potatoes, salt, and pepper, thyme, melted butter) using the remaining potato slices.

Cover skillet or pan with foil. and bake in a 425-degree oven for about 30 minutes. Uncover the dish and continue baking for an additional 30 minutes, or until the potatoes are golden brown.