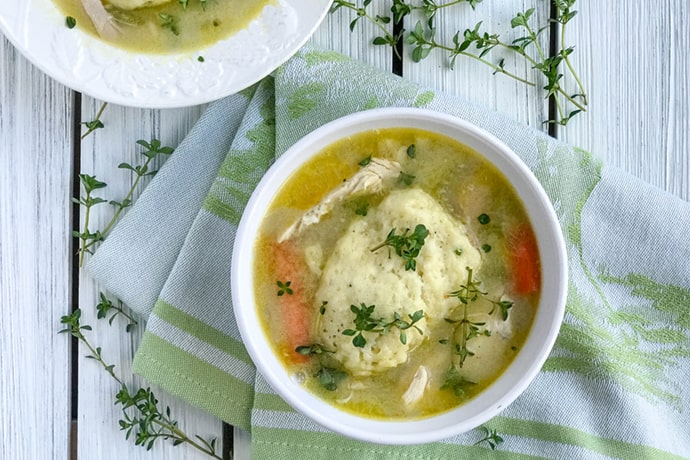 Chicken and Dumplings is a comfort food immune to the changing of seasons. At least in my humble opinion. And that’s part of its charm. It’s one of those dishes most of us have an opinion or two of.

Many fans believe this classic dish hails from the south. But Chicken and Dumpling recipes have origins in almost every culture but certainly, vary from region to region.

Generally, however, chicken and dumplings have been claimed by the South.

In fact, Relish writes, “Chicken and dumplings are as ingrained in Southern culture as old fashioned apple pies and folk renditions of ‘Coming ‘Round the Mountain’—the song does chant ‘We’ll be havin’ chicken and dumplings when she comes’ in the seventh verse. But what makes a dumpling dish authentically southern? The answer is in the dumplings.”

There are two forms of dumplings, they say, –rolled and dropped.

“Though some disagree on which region claims what shape, rolled dumplings tend to be more common in the south and dropped in the north.”

Most of my family is from the north — as you will see.

A Shortcut Chicken and Dumpling

Heartier than chicken soup and reminiscent of Sunday suppers at grandma’s house, this one-pot delicacy is a classic favorite.

Traditional recipes can take most of a day. Which, at times, is a comfort all on its own.

But when you’re craving chicken and dumplings, and you don’t have all day, here’s a recipe you can make 40 minutes or less.

The shortcuts are store-bought chicken stock (or frozen homemade if you’re so lucky) and already cooked chicken. Rotisserie chicken is a home cook’s best friend and works well here. You can also meal prep and poach or roast 3 chicken breasts ahead of time, shred, and have ready to go.

The dumplings, however, are made by scratch. I know many love the (rolled, smile) Bisquick Dumplings (2-1/2 cups mix to 3/4 cup milk). It’s certainly easy and quick. But there’s something extra homey and comforting by making your own (dropped) pillowy, light as air dumplings.

Fresh herbs in the recipe are optional, but oh-my-goodness, they are special in those dumplings! 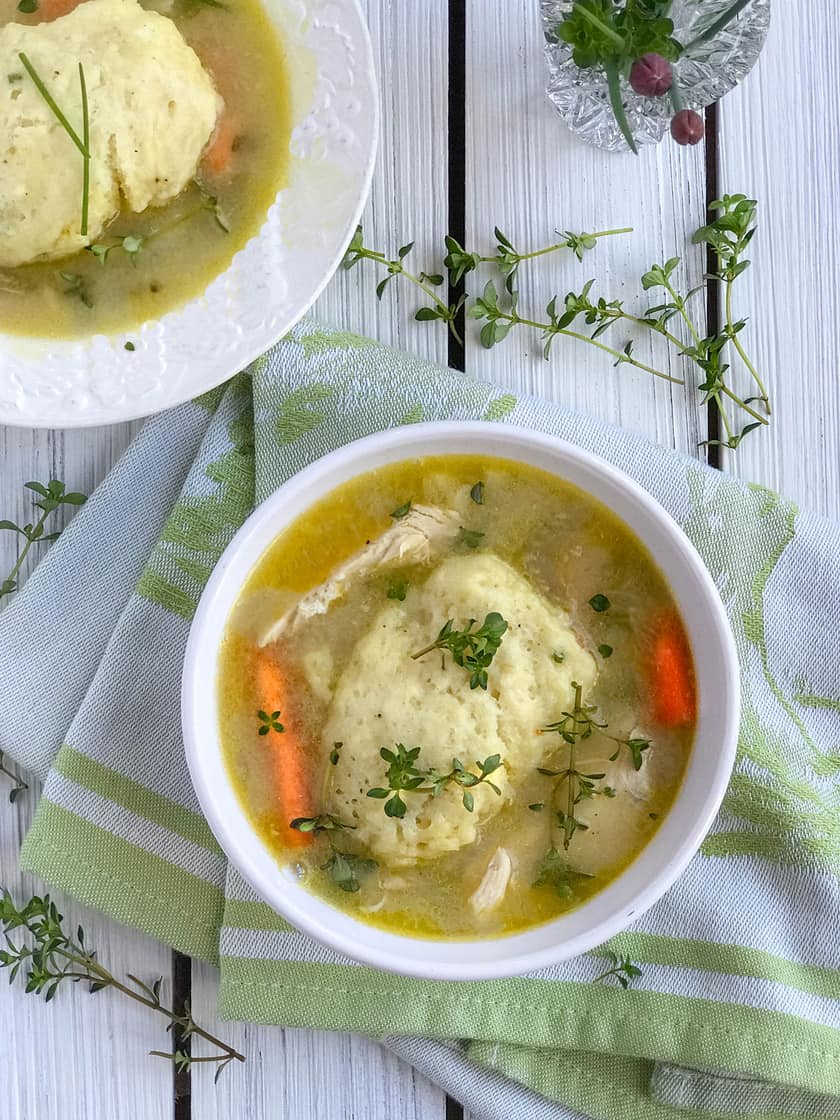 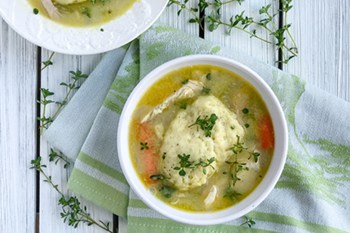 A quicker and simpler recipe for the classic Chicken and Dumplings that could take all day to make. This recipe can be made in 40 minutes or less… but is divinely delicious with homemade dropped dumplings.

In a dutch oven over medium heat melt butter and heat olive oil. Add onion, celery, and carrots. Sautee until they begin to soften; 3 to 4 minutes. Sprinkle in flour and stir constantly for about a minute, until no white flour can be seen. Slowly whisk in chicken stock, stirring until the broth is smooth and there are no flour lumps. Bring to a boil and add shredded chicken. Reduce heat and simmer 10 minutes or until the broth has begun to thicken and the vegetables are soft.

Meanwhile, make the dumplings. In a medium bowl, whisk together flour, baking powder, salt, pepper and a tablespoon of fresh chives if using. In a small bowl, whisk together buttermilk and egg. Add the buttermilk to the flour mixture, followed by the melted butter. Using a spoon or ice cream scoop, drop generous dollops of dumpling dough into the simmering pot, spacing them apart as much as possible. Cover the pot and reduce heat to low. Cook, undisturbed, until the dumplings are puffed and completely cooked through, 18 to 22 minutes. You can test a dumpling by cutting it in half. There should be no raw bits of dough.

Remove the lid and portion among bowls. Sprinkle with fresh parsley and chives if using.