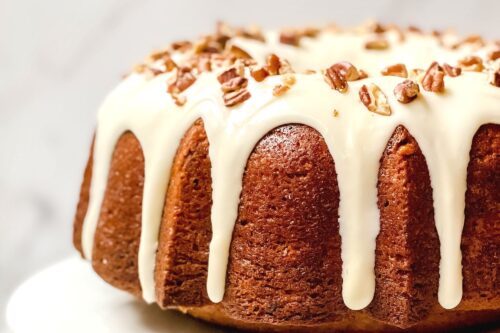 Hummingbird Cake is a moist and dense cake filled with ripe bananas, pineapple, pecans, and deliciously savory spices. Tweaked slightly from the original, this cake is simplified and made even easier in a Bundt pan. And, of course, drizzled in a thick cream cheese glaze for the ultimate in flavor.

Sometimes the very best recipes are the old ones, the tried and true, dog-eared recipes tucked away in the card file.

And while tastes evolve and change and are tweaked over time, there are those recipes that linger in our memories and when dusted off, and tried once again, can stand the test of time.

A Hummingbird Cake is just that… a classic recipe we should never forget.

Perfect all year, in all seasons, and for any celebration.

Or simply when you’re craving a dense, sweet, tender cake filled with flavors reminiscent of the tropics.

Its texture is much like a moist and tender carrot cake.

And simple? Oh my, yes. Especially when converted to a bundt cake.

The Hummingbird Cake made its popular debut in Southern Living magazine after the recipe was submitted in 1978 by Mrs. L.H. Wiggins of Greensboro, North Carolina. It’s now a globally loved cake.

After her death, it was written about Mrs. Wiggins that she “left behind a legacy of kindness that she shared by caring for others and, of course, cooking for them.”

A beautiful sentiment to be remembered by. And now, we have her lasting legacy in the uber-popular recipe bakers still love to make today.

Why Is It Called a Hummingbird Cake?

While the Hummingbird Cake, as we know it today, began with a recipe submission in 1978, the inspiration for the cake’s birthplace can be found in its key ingredients: bananas and pineapples.

The origins are found in the tropics of the Caribbean and most agree can trace its roots to Jamaica in the late 1960s and its “Doctor Bird Cake,” thus named for a nickname given to the Red-Billed Steamertail hummingbird, pictured above.

I know it seems like a stretch, but there are theories as to how this cake came to be named after a hummingbird.

Some believe it was aptly named because the cake is sweet enough to attract a hummingbird, which feeds on the sweet nectar of blooming flowers.

Others believe the streaks of yellow banana in the crumb of the cake is reminiscent of the hummingbird’s plumage.

In 1968, the Jamaican tourist board sent a press kit to the United States with island recipes, including one for the “Doctor Bird Cake.”

Soon after, variations of that recipe were printed in Southern cookbooks and newspapers, many under the descriptive heading, “The cake that doesn’t last.”

A unique combination of ingredients like banana, pineapple, pecans, and spices make this cake incredibly delicious. It’s texture and finishing of cream cheese glaze is similar to a moist carrot cake.

Here’s my version of this oh-so-delicious Hummingbird Cake. The exact ingredient measurements are in the recipe card at the bottom of this post.

Tips for Making a Hummingbird Cake

Vegetable Oil: While many delicious cakes contain butter, the original recipe called for oil which helps give this cake its moist, quick bread type texture.

Pineapple: Canned, crushed pineapple works best and be sure to use the juices in the cake batter. Do not drain them as this helps to deliver a lot of flavor and keeps the cake moist.

Pecans: You an use pecans in the batter as well as sprinkling them ontop of the cake. Toasting them delivers yet another layer of flavor that you will love.

If You Love Bundt Cakes, You May Also Love These