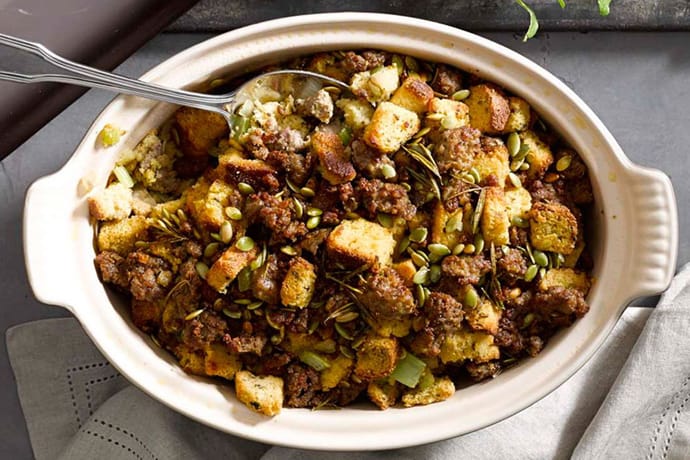 Thanksgiving wouldn’t be Thanksgiving without stuffing. Come and see these delicious and unique stuffing recipes everyone at your table will love! 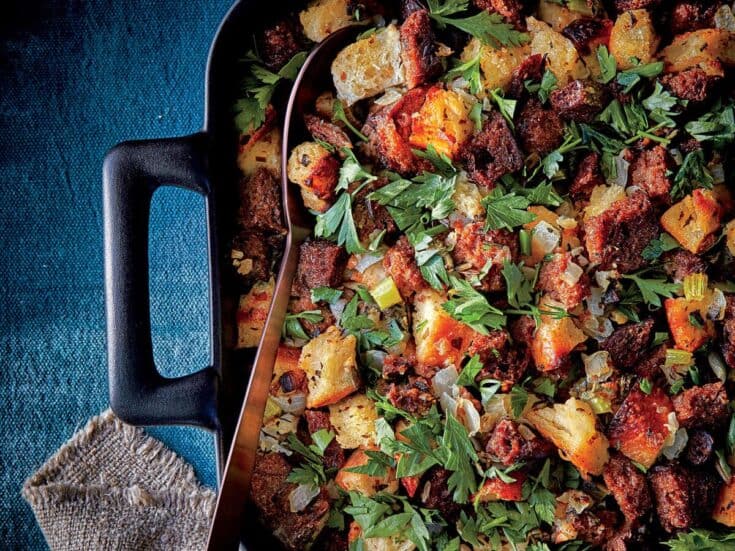 “This two-toned stuffing actually boasts five herbs, though hearty sage, rosemary, and thyme are most prominent. Look for packages of poultry herbs at the store; they’ll contain just the right amount of each these three herbs. You could also stick to just sage or rosemary, but leave the amounts as they are; otherwise they will overwhelm the dish. Look for bakery-style bread loaves, not presliced sandwich bread. If you can’t find pumpernickel, you can substitute seeded rye bread.” 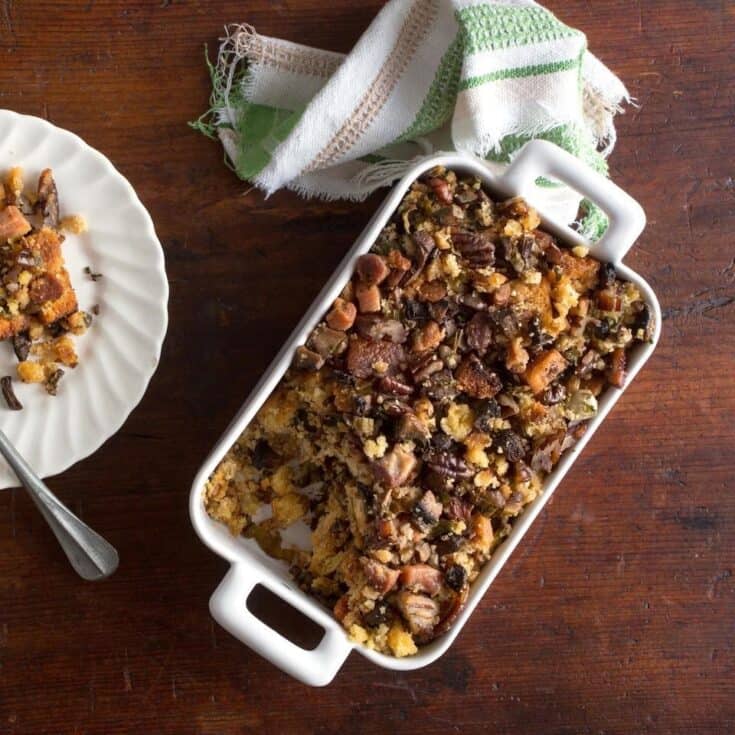 “This healthy mushroom-and-leek cornbread stuffing recipe is a lightened-up version of the must-have holiday side. Whether you call it stuffing or dressing, you can make this recipe moist or crispy. If you’re an extra-moist-stuffing type, bake it covered for the full 50 minutes; if you like some crispy bits on top, follow the recipe as written: bake covered for about 30 minutes, then uncovered for an additional 20 minutes.” 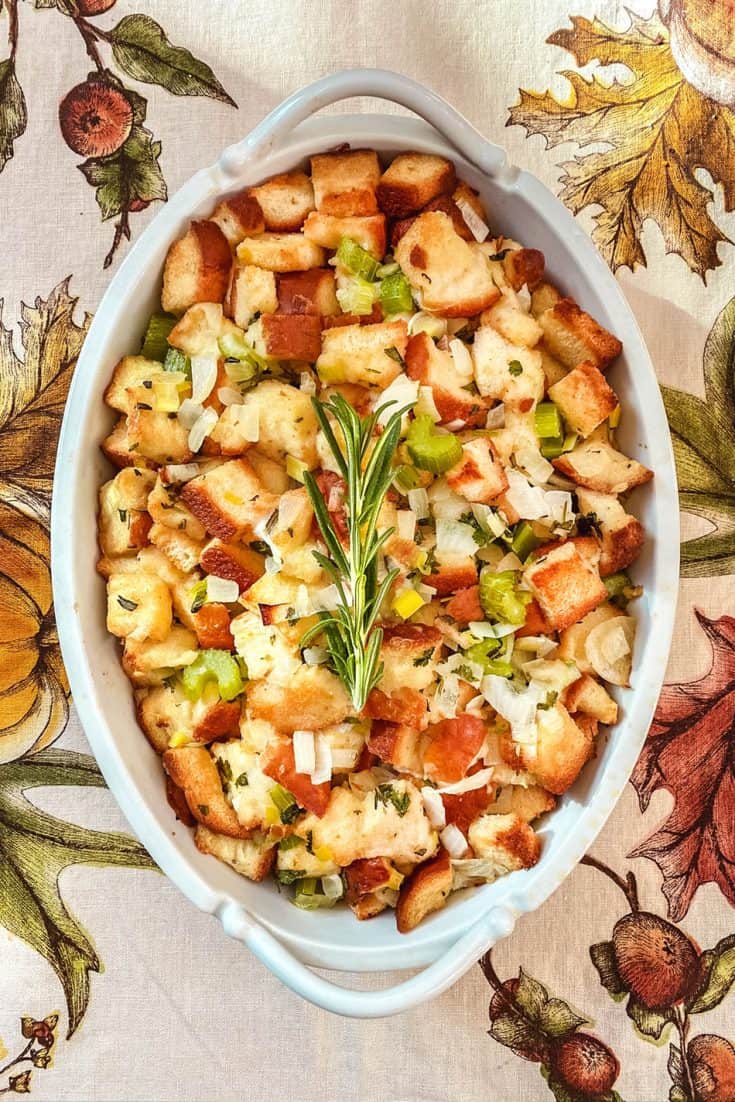 Simple and Classic Stuffing for Thanksgiving

Simple and Classic Dressing or Stuffing for Holidays. Whether that be Thanksgiving, Christmas, New Year’s … or any other holiday. A simple tried and true recipe made with onions, celery, herbs, butter, broth, and toasted bread. It’s simply our favorite. 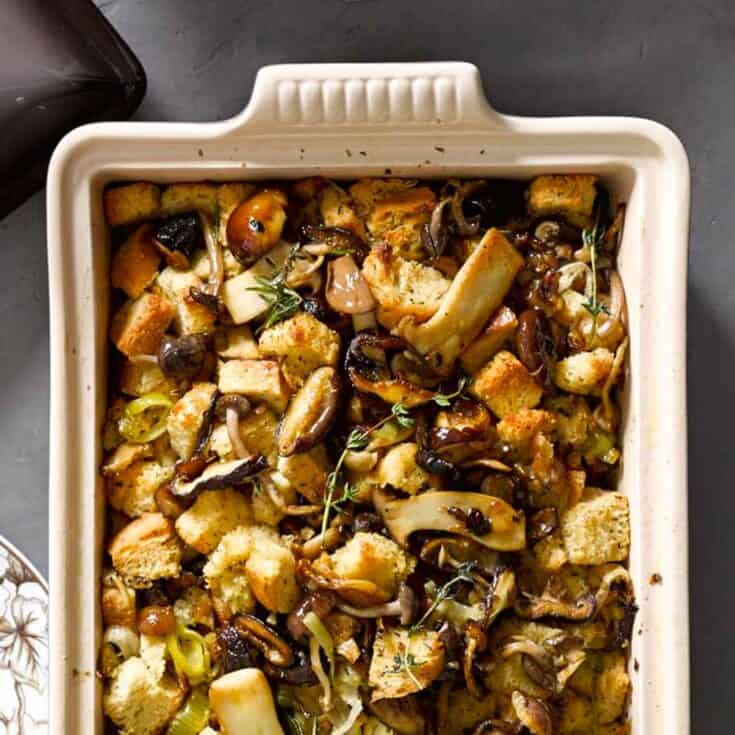 “Here, wild mushrooms and leeks add an extra depth of flavor to a focaccia-based stuffing for a satisfying Thanksgiving side.” 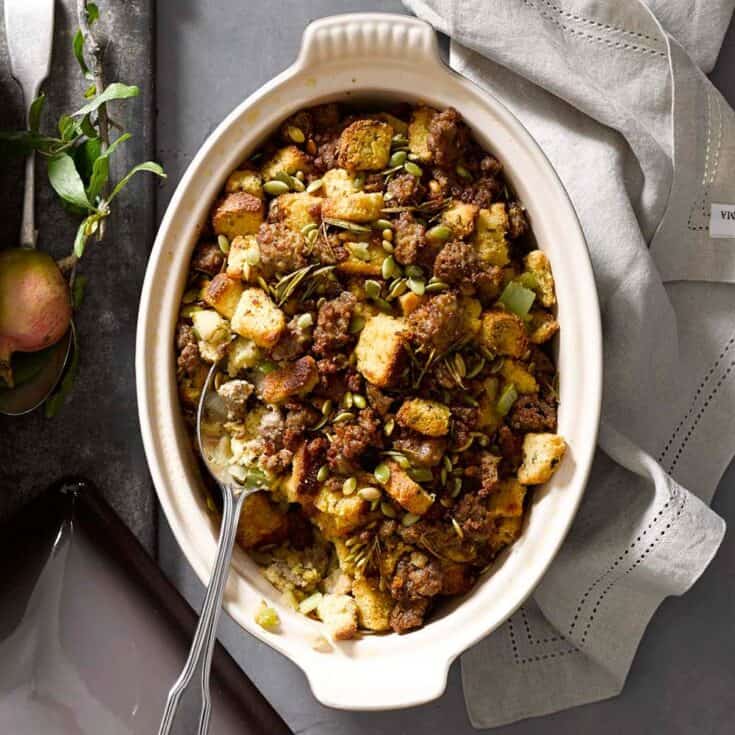 “This slightly spicy Southwestern-inspired stuffing will add some unexpected heat to the Thanksgiving table. Be sure to buy fresh (uncooked) Mexican chorizo rather than the cured Spanish variety.” 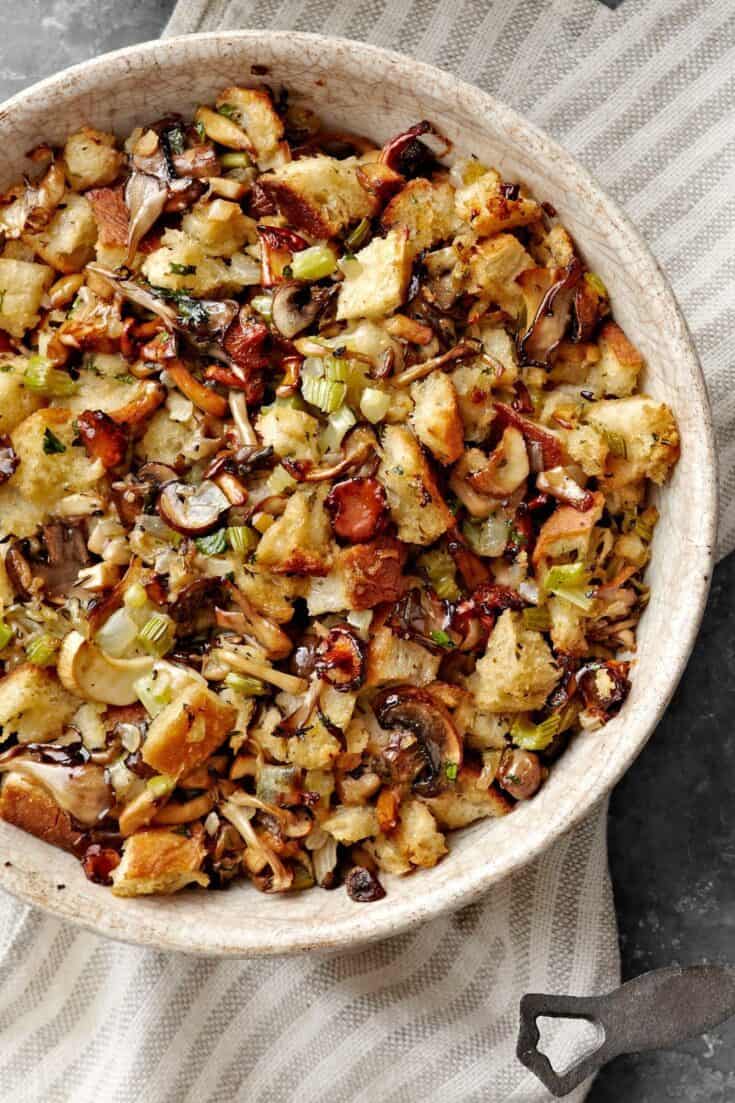 A lighter-than-expected stuffing. Serve this Thanksgiving favorite with the Perfect Roast Turkey. Assemble the stuffing a day ahead in a buttered dish, cover, refrigerate and bake when needed.” 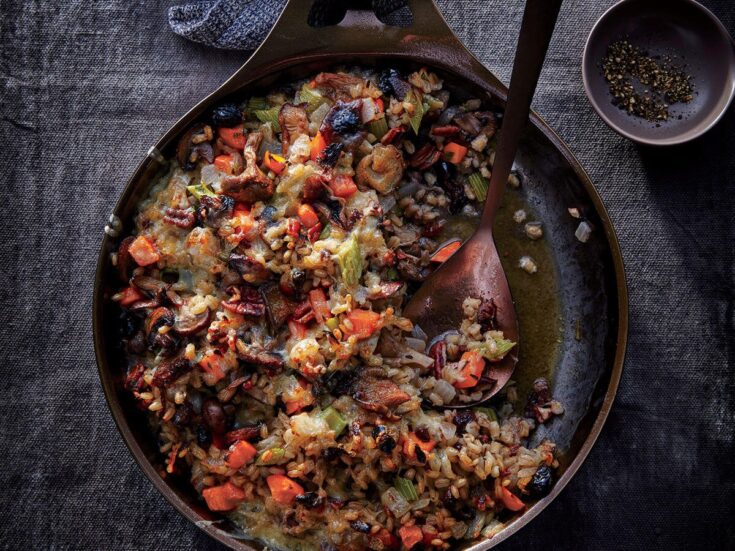 “This stuffing is full of hearty texture from chewy barley, crunchy pecans, and meaty mushrooms. Tart-sweet dried cherries and nutty Gruyère cheese build even more flavor for a substantial side guests will love. Swap the chicken stock for unsalted vegetable stock or water to make the dish vegetarian. Reheat leftovers with a splash of stock for a slightly looser, though equally delicious, stuffing.” 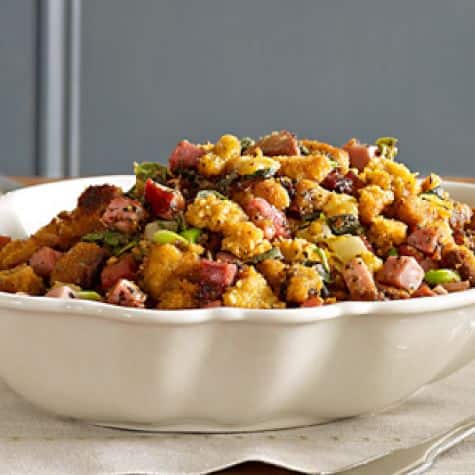 CORN BREAD AND HAM STUFFING WITH CARAMELIZED APPLES AND FENNEL

“The saltiness of the ham plays off the sweetness of the apples, fennel, and cornbread in this hearty stuffing. To streamline prep, the recipe relies on a cornbread stuffing mix, made from cornbread, wheat bread, and aromatic sage and thyme.” 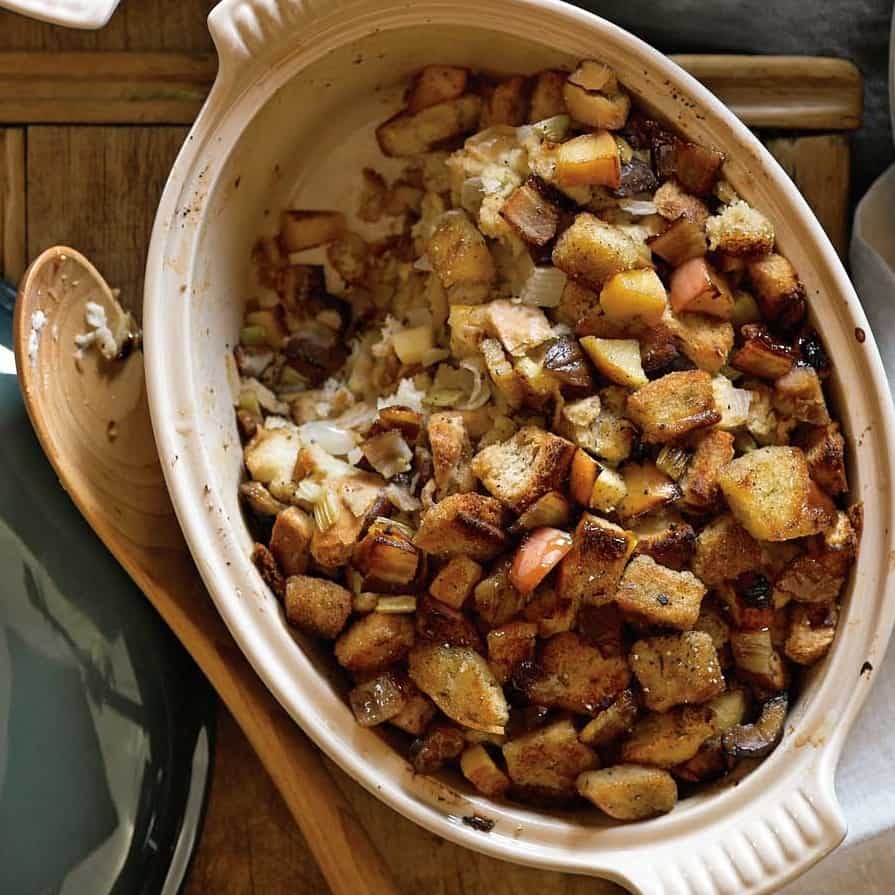 “An Italian-inspired focaccia stuffing mix forms the foundation of this sensational stuffing. For added crunch and savory flavor, we add in roasted chestnuts, bacon and chunks of sweet apple.” 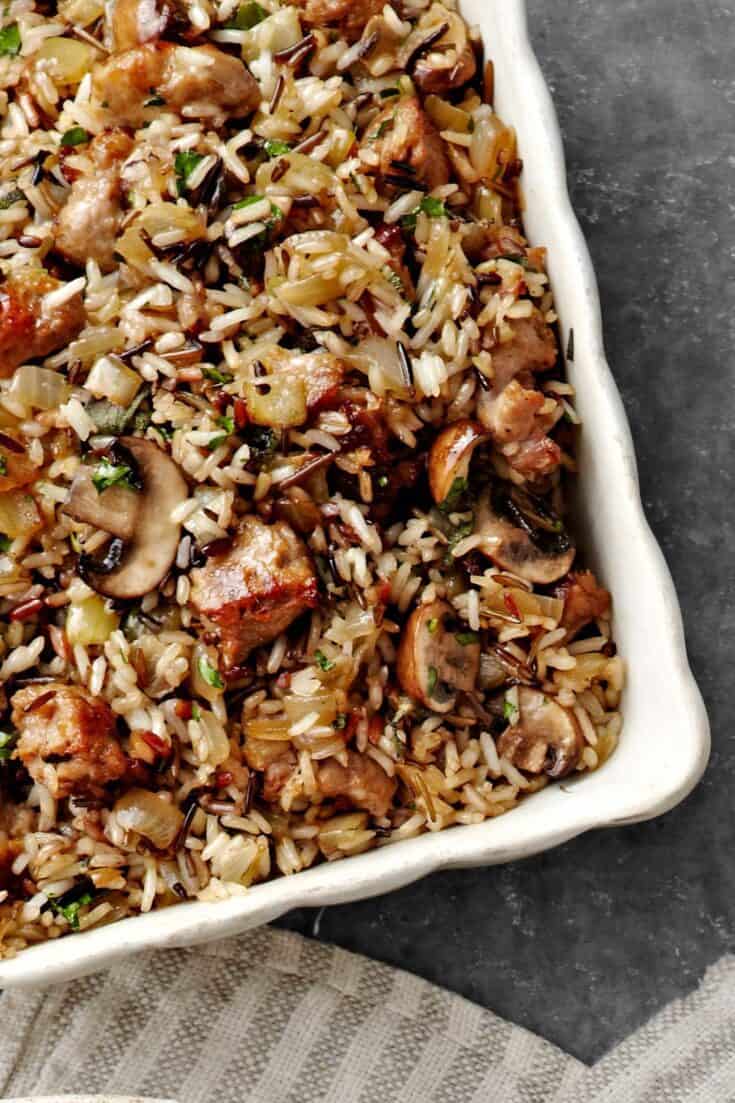 Wild Rice and Basmati Dressing with Sausage and Sage Recipe

“For this take on Thanksgiving dressing, two types of rice are cooked in a fragrant medley of mushrooms and onions sautéed in butter, bay leaf, and fresh sage.” 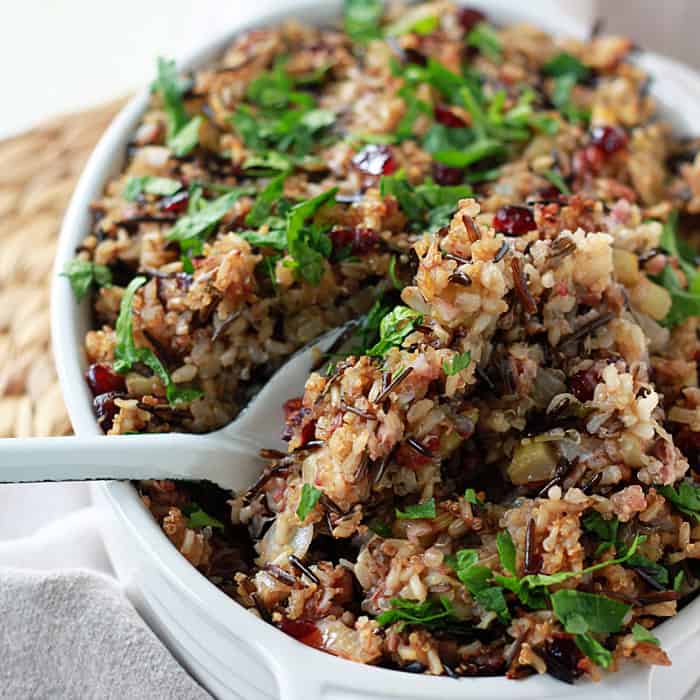 “Sometimes it’s nice to shake things up a bit. So I thought I’d create a rice-based stuffing with all of the traditional stuffing flavors we love. Something that’s a little more dense and hearty – a vegetarian (and vegan!) stuffing that’s naturally gluten-free, too. Why not cover all of the dietary bases while also making something everyone will no doubt clamor for?” 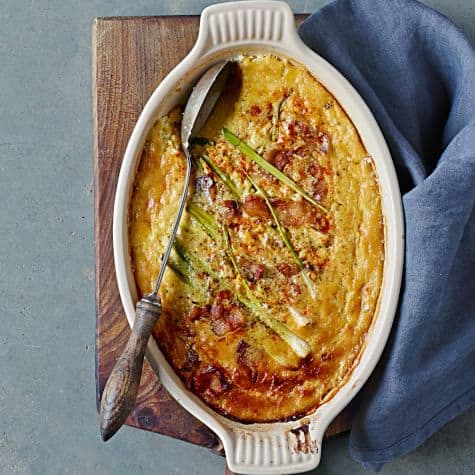 "Michael Sullivan, Butcher at Blackberry Farm, says this dish was inspired by a corn pudding that his grandmother made. He adds guanciale, an unsmoked Italian bacon made from the pig’s jowl, to the batter before baking, although thick-cut bacon is a great stand-in. When fresh corn is in season, you can fold in kernels cut from the cob; they lend wonderful texture and flavor. If you’d like, place a few whole green onions on top of the batter before baking.” 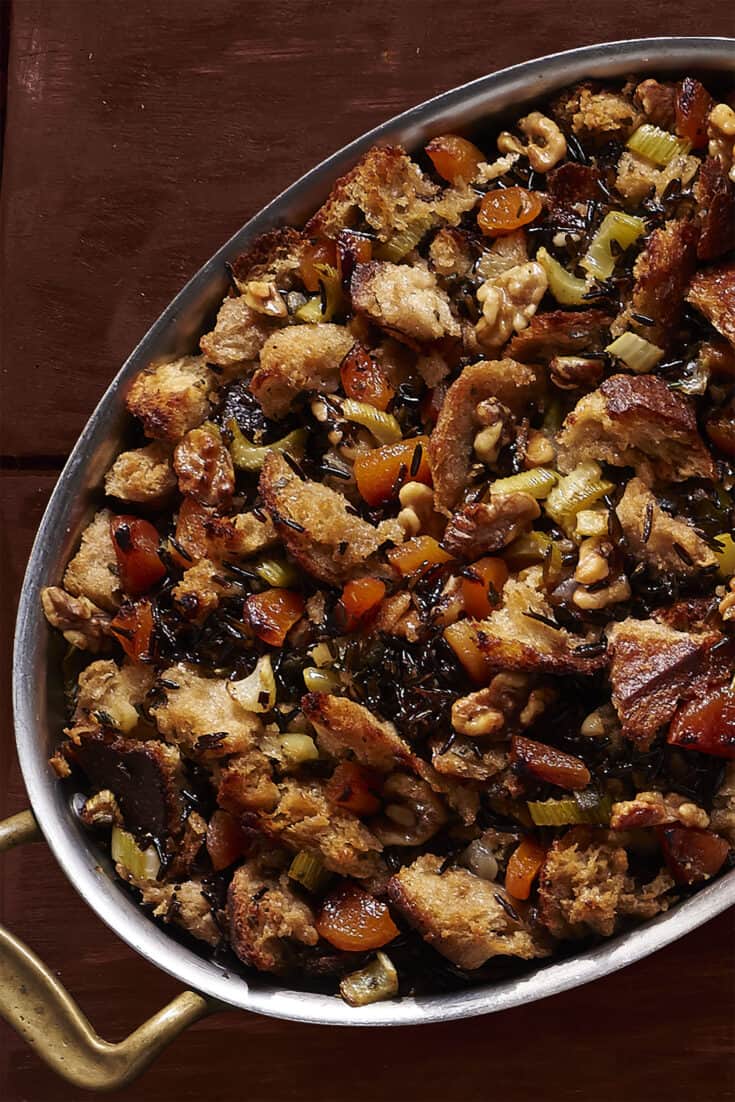 “Wild rice and apricots give the classic stuffing a sweet spin.” 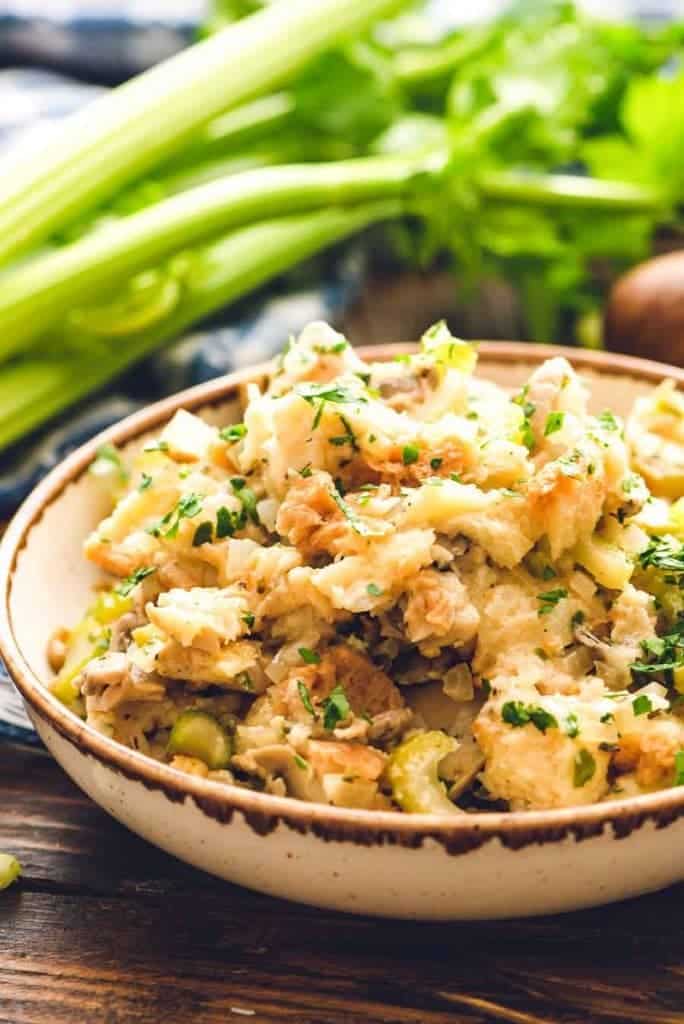 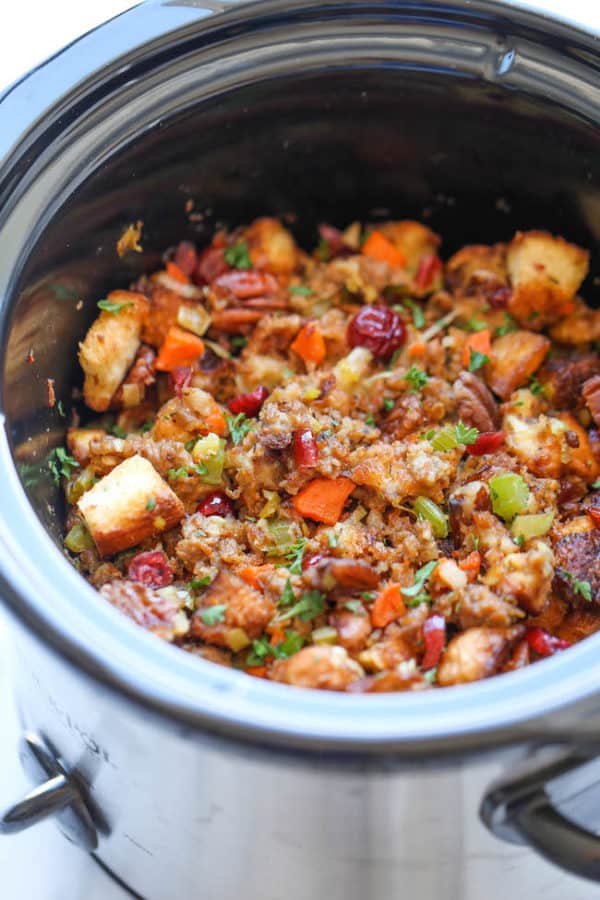 “The best and easiest stuffing ever made right in the crockpot, making Thanksgiving prep just that much easier!”