Skip to content
You are here
Home > LIFE > Health > Watercress 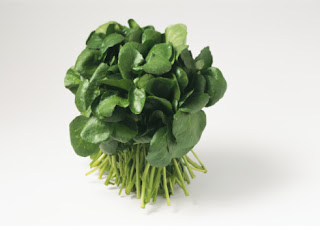 Foodies have long savored the slightly bitter peppery flavored green known as watercress, adding it in abundance to salad greens, sandwiches and soups.

But watercress has amazing nutrient qualities as well. According to a study conducted by the University of Ulster, eating watercress daily can significantly reduce DNA damage to blood cells, which is considered a vital trigger to the development of cancer, specifically, the formation of tumors. Chlorophyllin in spinach and kale has been proven to reduce the risk of liver cancer.

Sometimes the most delectable flavors that foodies love, are a nutritional sacrifice. Not so with watercress. In fact, when paired with grilled salmon, nutritionists tell us that they limit cancer development and decreases the rate of both Leukemia and Kidney Cancer.

Watercress is one of the oldest known leaf vegetables to be consumed by humans. Native to Europe and central Asia, it is botanically related to the mustard and is in the cabbage family. It is a fast-growing, aquatic or semi aquatic perennial and is also closely related to the popularly known flower, the nasturtium.

For tonight … salmon and watercress sound fantastic to me.

And here is a quick-cook recipe from Martha Stewart Everyday Food you might enjoy.

Brushing fish with a citrusy glaze while it’s cooking infuses it with flavor. Add a simple salad to round out the meal.

Directions:
1.In a small bowl, whisk together soy sauce, 3 teaspoons honey, and orange juice; season glaze with salt and pepper. In a large bowl, whisk together 1 tablespoon glaze, 1 teaspoon honey, vinegar, and oil; set dressing aside.
2.Heat broiler, with rack 4 inches from heat. Line a rimmed baking sheet with foil. Season salmon with salt and pepper and broil 5 minutes. Remove fish from oven, brush with glaze, then broil until opaque throughout, about 2 minutes, brushing with glaze once more.
3.Add orange segments, watercress, and onion to dressing and toss to combine. Season with salt and pepper. Divide salad among four plates and top with salmon. Serve immediately.