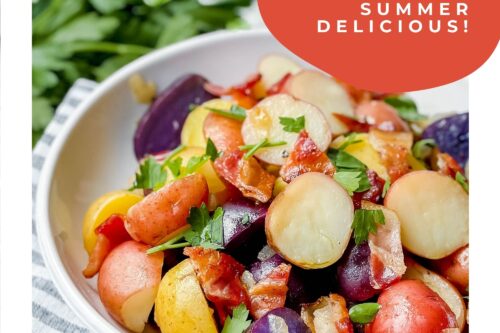 This German Potato Salad is a simple hot potato salad recipe with fork-tender potatoes, savory bacon, and fresh parsley tossed in a delicious tangy dressing you will love.

Summer is near, and picnics and backyard BBQs are on the horizon. It’s grilling season. And with it comes all kinds of delicious summer side dishes that make the meal.

Right? Who doesn’t absolutely love the sides? My hand is raised high!

I can’t imagine a Memorial Day or 4th of July, or summer BBQ, or an Oktoberfest without a potato salad.

There was rarely a time when my German grandmother’s kitchen was without potatoes and onions cooking, searing or frying. The memory of that aroma is still with me today.

One of my earliest memories of her was standing over a pot with a pairing knife in one hand and a potato in the other. There was no one on earth (in my world) that could handle a potato with lightning speed like her.

Whether she was peeling, chopping, or slicing. It was rather stunning to a little girl completely in awe of her grandmother.

I’ve never mastered that potato skill. But I suppose with 13 brothers and sisters on a wheat farm, preparing potatoes may have been an everyday activity.

One of the beauties of American culture is its amalgamation of foods that evolve from various cultures and become new favorites rooted in tradition.

Much like Hot Slaw, German settlers brought a variation of savory hot potato salad dressed with bacon and vinegar when they emigrated to Pennsylvania.

Here’s what we know:

This German Potato Salad is most closely associated with the Bavarian region of southern Germany where they serve amazing potato salads. Although you will find that from family to family, establishment to establishment, each recipe twist of a warm potato salad is uniquely delicious.

This is my twist on German Potato Salad. With input from my family living in the Black Forest region.

These simple ingredients will make the most delicious warm potato salad. The exact measurements are in the recipe card at the bottom of this post.

How to Make German Potato Salad

Begin by placing the mini red potatoes in a pot and cover them with cold water. Bring to a boil and cook until fork-tender. Drain and set aside.

While the potatoes are cooking, place the bacon in a large skillet over medium-high heat. Fry until browned and crisp. Remove from the pan, drain, chop, and set aside.

Then add the onion to the bacon grease, and cook until browned. Stir in the vinegar, water, sugar, mustard, salt, and pepper. Cook for 2 minutes, and then turn off the heat.

Add the hot dressing to the potatoes and gently toss to coat. Fold in the bacon and parsley and season with salt and pepper to taste.

Do You Serve German Potato Salad Hot or Cold?

This potato salad is best served warm but is delicious at room temperature too.

During warm months, it’s important to not let it sit at room temperature for more than an hour before being refrigerated.

While this salad can absolutely be eaten cold, just as my guys when they find it in the refrigerator, it’s most delicious when warm.

To reheat, transfer the salad to an oven-safe baking dish, cover with foil and place in a 325-degree oven until heated through; about 30 minutes.

You may want to drizzle additional olive oil over the top as the potatoes tend to absorb the dressing over time.

Individual portions can be reheated in the microwave at 50% power in 1-minute increments until heated through.

This potato salad will keep in the refrigerated for up to 5 days. Store in an airtight container.

To reheat individual leftover servings, microwave at 50% power for 1 minute at a time (stirring and testing after each increment) until heated through.