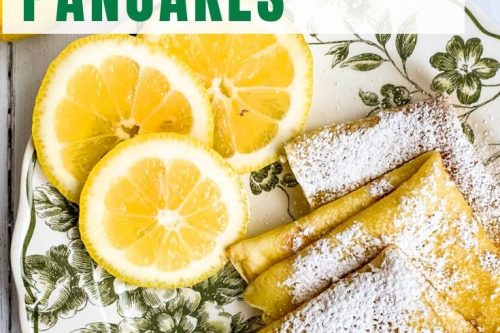 Irish Shrove Tuesday Pancakes are a delicious way to celebrate Shrove Tuesday. These crepe-like pancakes are folded into quarters and sprinkled with fresh lemon juice and confectioners’ sugar.

Once forbidden during Lent, eggs, and fats were ingredients to dispose of by Ash Wednesday. On Tuesday, Irish bakers would make Shrove Tuesday Pancakes use up those forbidden ingredients and clear the pantry for the Lenten season.

Tuesday, the day before Ash Wednesday is known by many names: Mardi Gras, Carnival, Fat Tuesday, Shrove Tuesday and even, Pancake Day.

“Pancake Day, or Shrove Tuesday, is the traditional feast day before the start of Lent on Ash Wednesday. Lent – the 40 days leading up to Easter – was traditionally a time of fasting and on Shrove Tuesday, Anglo-Saxon Christians went to confession and were “shriven” (absolved from their sins). A bell would be rung to call people to confession. This came to be called the “Pancake Bell” and is still rung today.”

Read More: How did your Irish ancestors traditionally uphold Lent

What is Pancake Day?

In Britain, the day before Ash Wednesday, is known as Shrove Tuesday, an old English word derived from “shrive,” meaning, to “confess all sins.”

How Shrove Tuesday is Celebrated in Britain

Pancake Day is a traditional day for making and eating pancakes. It’s also a delicious way to use stores of milk, butter, and eggs, which are forbidden during Lent.

Irish Central says, “The earliest records of pancakes and pancake tossing appeared in the fifteenth century when the pancakes were a little thicker than the modern pancake; they would also often have added spices for a little decadence. It wasn’t until the eighteenth century and the influence of French cooking and their thin crepes that pancakes more as we know them now.”

“In Scotland, special oatcakes called Bannocks were made using oatmeal, eggs, and salt and cooked on a griddle. A charm would be added to the dough and if an unmarried person found it, they would be married within the year.”

“Wales also had their own customs where people would pass from door to door begging for flour, lard or butter. In some parts of Wales, children would kick tin cans up and down the streets, believed to be commemorating the putting away the pots and pans for Lent.”

In 1619, Pasquil’s Palin wrote, “And every man and maide doe take their turne, And tosse their Pancakes up for feare they burne.”

Pancake ingredients symbolize significance during this time of the year.