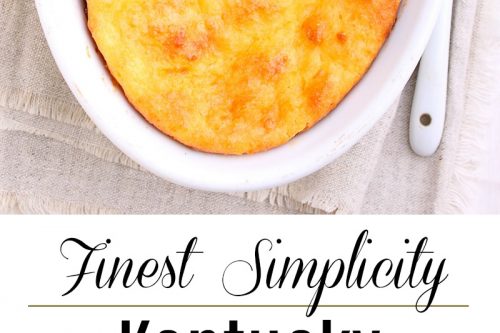 Sweet Kentucky Spoonbread Corn Pudding is a Southern classic that’s incredibly easy to make, creamy, buttery, eat-with-a-spoon comfort food. This is my family version of this simple recipe which always makes an appearance on our Thanksgiving table, but is absolutely perfect to enjoy at any time of year!

Some have said this Sweet Kentucky Spoonbread Corn Pudding is what you expect at grandma’s table for Sunday supper.

While recipes vary from region to region, family to family… this is my version of this ever-so-soft and luscious spoonbread that has a place on Sunday tables and backyard BBQs. From Thanksgiving to Easter celebrations. And every occasion in-between.

Why? Because spoonbread is just perfect… in every way. It’s simplicity, at its finest.

Marion Cunningham, writing for the Los Angeles Times, says, “Tracing the evolution of cornbread from suppone (Indian corn) to spoon bread is in some ways similar to studying history through fossils and other artifacts. There is a rough parallel in these recipes with the social and cultural movement of people through history. A properly prepared dish of spoonbread can be taken as continued testimony to the perfectibility of humankind.“

As with all historically significant recipes, they evolve over time. Home cooks, generation after generation, add bits and pieces of ingredients, herbs, and techniques. Notes written and passed down from one to another survive because they’re delicious and have stories to tell.

The Difference Between Spoonbread and Corn Pudding

Some ask the difference between spoonbread and corn pudding. North Carolina’s Courier-Tribune says spoonbread is not a custard, and not cornbread. They say, “Spoonbread is unique. Some compare it to a souffle while others say it is more like a casserole. It’s not cornbread but it is cornbread. Just softer and creamier.“

Can I substitute anything for the chives?

Help! I don’t have the right size pan.

Don’t worry – just use whatever is closest and start checking the spoonbread towards the end of cooking as it may take a little more or a little less time to set.

If you enjoyed this recipe on 31 Daily, you might also enjoy:

Save this and pin it for later!

Make sure you don’t lose track of this recipe by pinning it for later! If you are not already you can follow me on Pinterest, as well as keep up with me on Facebook, Instagram and YouTube. If you make this recipe I would also love it if you’d tag me in your photos and leave a star rating below!

In a pinch, very thinly sliced salad onions (just the green parts) can be substituted for the chives.