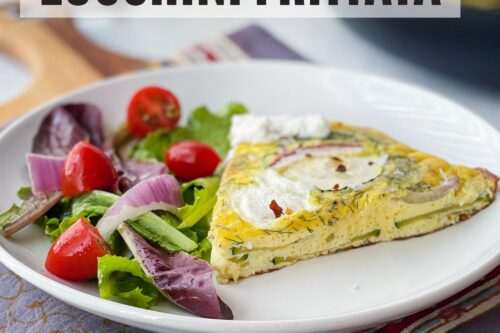 This Mediterranean Zucchini Frittata is incredibly soft, creamy, and delicious. Ready in 30 minutes or less, it’s filled with vegetables, ricotta cheese, and seasoning like dill. So simple to make, it’s become a new favorite for brunch or a light dinner.

An easy-to-make, go-to meal anyone with a skillet can cook.

While I have several frittata recipes at 31Daily, this Mediterranean-inspired frittata is one of my favorites. I’m not sure which I love most… the zucchini or the dill. Or perhaps it’s the whole combination of flavors that truly makes it a standout for me!

What is a frittata?

A frittata is an egg-based dish, similar to an omelet, cooked in a skillet on the stovetop and finished in the oven. It’s creamy with a soft delicious texture and packed with vegetables and flavor.

While a frittata and a quiche may seem similar, they are two separate dishes with their own unique cooking techniques. How do you know which is which?

A quiche is a silky and rich mixture of eggs, cream, and cheese—very custardy and usually combined with meat and vegetables—and often baked in a pastry shell. Unless it’s a crustless recipe.

Frittatas are usually made using eggs, cream, vegetables, and cheeses. Sometimes they contain a variety of meats. Most typically, they are cooked in a skillet instead of a pie plate or dish.

The Italian word “frittata” is defined by Merriam Webster as “an unfolded omelet often containing chopped vegetables or meats.” Later they describe it as similar to a Spanish omelet.

While both a frittata and an omelet contain similar ingredients; egg custard, vegetables, and sometimes meat, the cooking methods are different.

Unlike an omelet, a frittata mixes the vegetables into the custard as it cooks.

How to Do Know When a Frittata is Done?

A frittata is done when the center is set. But the best way to be sure it is cooked through is to use a thermometer to measure its internal temperature. The FDA says a frittata or quiche should reach 160 degrees F.

This simple dish only requires a handful of ingredients. The exact measurements are in the recipe card at the bottom of this post. Here’s a list of what you will need.

How to Make a Zucchini Frittata

Making a frittata is one of the simplest things you can cook. This recipe uses a stovetop-to-oven method, which is my preferred way to cook a frittata.

Step-by-step instructions are in the recipe card at the bottom of this post, but here is an overview.

Slice the vegetables thinly and saute in a skillet.

While the vegetables are cooking, whisk the eggs, cream, and seasonings together.

Step 3: Cook until the edges are set

Pour the egg custard into the skillet with the vegetables and gently mix to combine. Cook until the edges are set.

Bake in a preheated oven until the center is set with an internal temperature of 160 degrees F. Let cool slightly before cutting into wedges.

Tips for Making a Frittata

Vegetables need to be tender before adding the egg custard. When raw vegetables are combined with the custard, it tends to become soggy and the vegetables do not fully cook.

For best results, cook them in a skillet before adding the custard.

Cheese provides a delicious flavor to a frittata as well as a creamy texture. I love soft cheeses (like the ricotta I’m using here), but goat cheese and feta are delicious options too. And parmesan is always a good idea.

Keep an eye on the frittata as it bakes

It’s important to not overbake the frittata. Keep a close eye on it. What you’re looking for are eggs that are puffed and the center is set.

The frittata continues to cook as it rests after removing it from the oven.