Rhubarb Pie is the essence of spring and the taste of summer to come. It’s fresh, bright, fantastically delicious, and just like Grandma used to make. 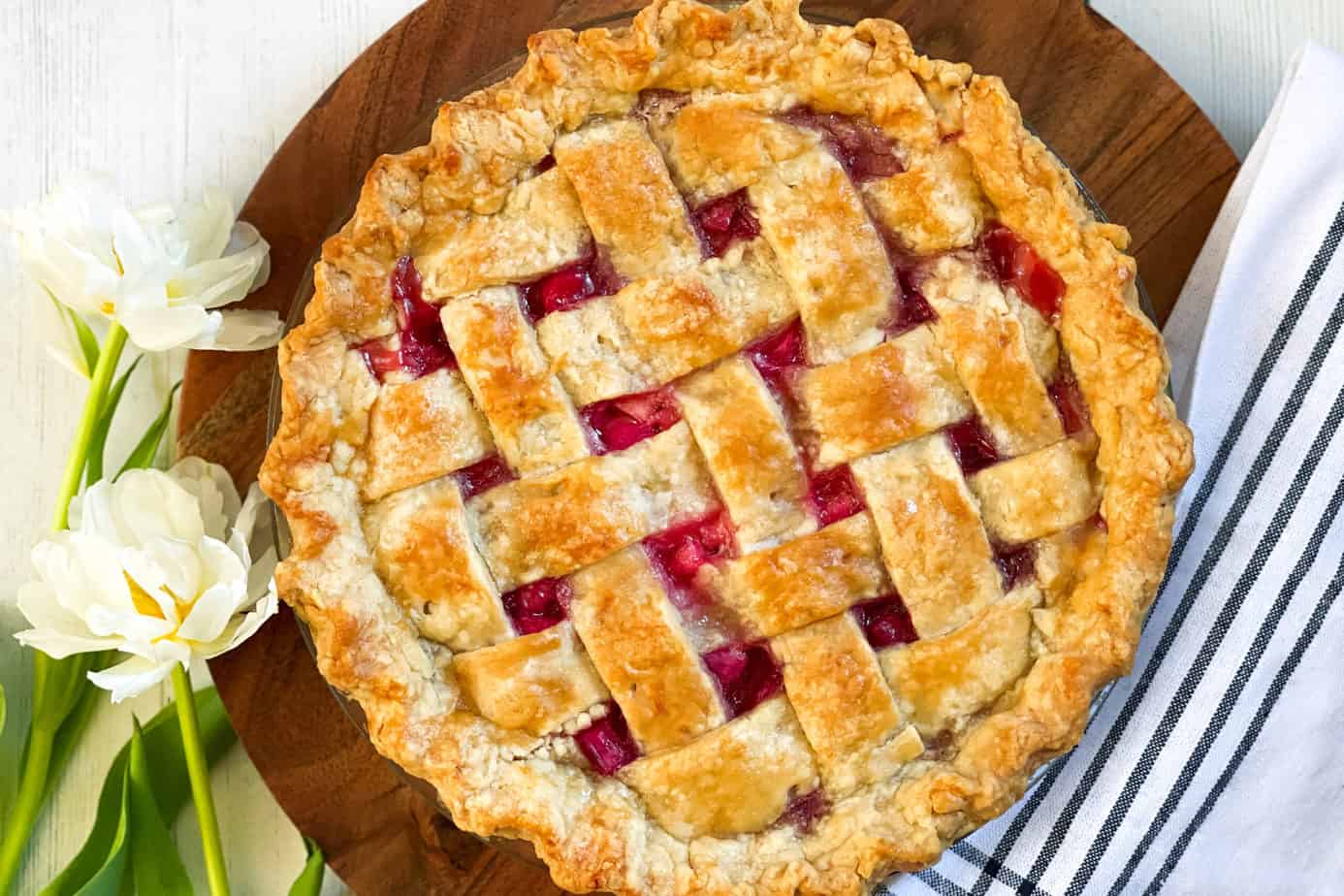 Rhubarb Pie is a sweet and tangy dessert that is the essence of the season. Beginning in spring and into early summer.

Rhubarb is a garden plant with beautifully large leaves grown in gardens everywhere. Its bright red stalks, although tart, become sweet and utterly delicious when sweetened in pies.

Immensely popular in the UK as well as the United States. Rhubarb has been cultivated since the 1600s and the stalks have been eaten since the 1700s.

Rhubarb originated in China where it grew in the cold climates of Mongolia, and the Himalayas’. It’s also been known to grow wild in Ukraine and along the banks of the Volga River.

My grandmother, whose family were Germans living in Ukraine, always grew rhubarb in their backyard. I once met a woman, also of Germans from Russia heritage, who proudly told me her grandparents brought their rhubarb plant with them to Ellis Island. And to this day, the plant is still thriving in her backyard.

The first recorded rhubarb pie recipe, according to Alan Davidson (Oxford Companion to Food), is for Rhubarb Tart in an 1806 cookbook by Maria Eliza Rundell.

So know that when you make a rhubarb pie, you’re cooking history with an eon-years-old tradition. 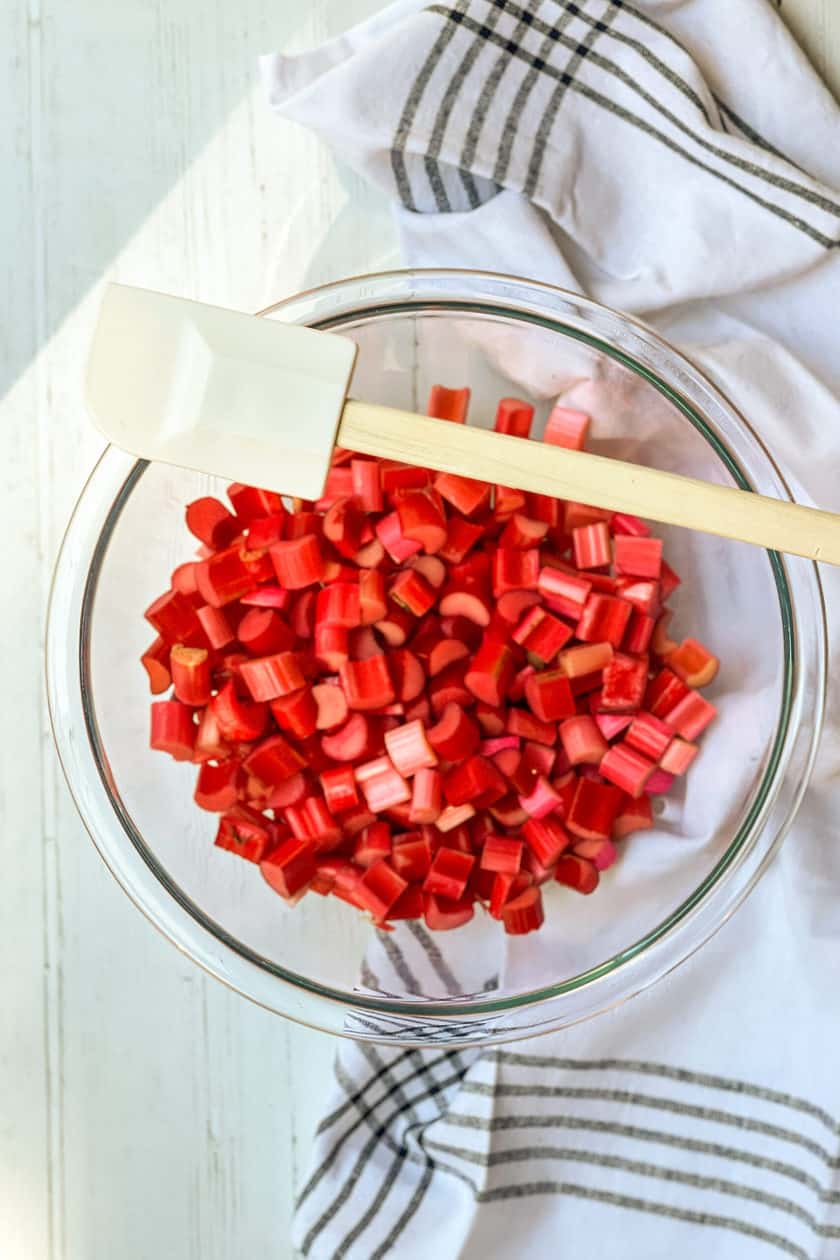 Rhubarb is superb in all kinds of baked goods from pies, bread, crumbles, cakes, and crisps. The bright red and pink stalks are sold seasonally in markets everywhere, without their leaves (they’re toxic!).

Here are the ingredients you’ll need to make your own Rhubarb Pie:

While I often use store-bought pie crusts for easy desserts, rhubarb pie with a lattice top is a bit different. Much like pumpkin pie at Thanksgiving, it’s just incredibly delicious with homemade.

That being said, I totally get wanting to skip this step. In fact, I had pie crust anxiety for years. My mother is a master homemade pie crust maker. Growing up… mine never ever resembled her smooth, unblemished texture and perfect fluted edges.

I finally conquered that silly pie crust anxiety. The remedy?

I gave myself grace in the form of store-bought backups. They were always in the refrigerator, every time I made a pie. Once I could relax and know that a backup was steps away, the anxiety evaporated… and I could finally actually enjoy making delicious homemade pie crusts, whether they looked perfect or decidedly not.

What I learned was I’d never added enough water to the dough. A simple step, an easy fix.

Just know that whether you make your pie crust… or buy it… the rhubarb pie will be delicious!

Here’s How to Make This Homemade Pie Crust

Make the pie dough by combining flour and salt in a mixing bowl. Cut in chilled butter and shortening with a pastry cutter or two forks until it resembles coarse crumbs. Then drizzle in ice water until a dough begins to form.

Transfer the dough to a floured surface and form into a ball. Divide the dough into 2 equal pieces and flatten to a disc shape about 1-inch thick. Wrap each pastry and chill for at least 2 hours. This step is super important.

When you’re ready to make the pie, unwrap a pastry disc and put it on a floured surface. Using a rolling pin, begin in the center of the disc and roll outward in one direction. Rotate the dough a quarter turn and roll again. Continue this process until you have a 12-inch circle.

Fit the pastry into the bottom of a 9-inch pie plate, making sure it fills the dish. Leave the overhang of dough and fill with the rhubarb filling.

Roll out the second disc as described above.

Place half of the strips, every other one, over the pie filling, working from the shorter side across. Space the strips evenly across the pie.

Then carefully thread the remaining strips crosswise, weaving them over and under the first strips you laid out. Press the edges of the strips into the bottom pie crust edges to seal.

Fold the overhanging crusts up and into the pie to create a roll and then crimp the edges. Brush the pastry top with beaten egg white. 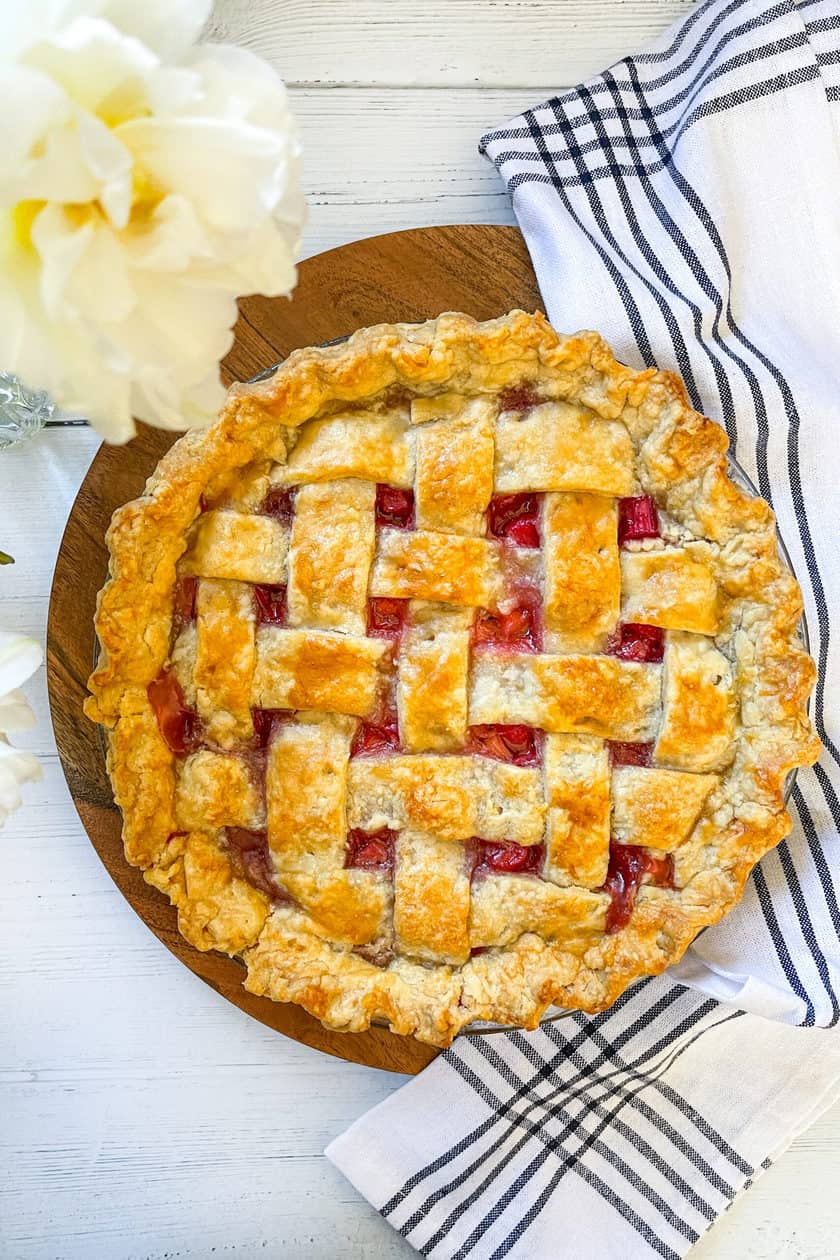 How to Make a Rhubarb Pie

A simple to make spring and summer pie begins with beautiful fruit… or in this case, vegetable.

Prepping rhubarb is much like celery and super easy to chop. Simply wash each stalk and trim both ends. You will need 4 cups of chopped rhubarb. I prefer thinner stalk to thicker stalks of rhubarb, but sometimes, you take what you can get.

For thicker stalks, I usually half them lengthwise and then chop them into 1/2-inch pieces.

Preheat the oven to 400°F and line a baking sheet with foil for easy cleanup. Set aside.

To Make the Filling:

Roll Out the Pie Dough:

Retrieve chilled homemade pie dough, as described above, or a store-bought pie dough and roll it into a 12-inch circle. Fit to the bottom of a 9-inch pie plate.

Spoon the filling into the crust, smoothing it with a spatula. Place the butter pieces on top of the filling.

Although you can always top the filling with a vented solid crust, here’s how to make the lattice if you choose.

With a rolling pin, roll out the second dough disc and cut into 1-inch wide strips. Lay every other strip over the pie filling. Then crosswise, weave in the remaining strip, over and under the first strips, and press into the bottom crust to seal.

Fold the overhanging pie crust inward toward the pie, creating a roll. Then crimp the edges and brush the crust with beaten egg white, sprinkled with sugar.

Slip the pie into the preheated 400° oven and bake for 20 minutes. Then, reduce the oven temperature to 350,° without opening the oven, and bake for an additional 25 to 30 minutes. You want the filling to be bubbling and the crust beautifully browned. However, I often add a pie shield about halfway through baking to prevent over-browning of the crust.

It’s important for the filling to bubble as it will activate the thickening agent. Otherwise, the filling could be soggy.

Let cool completely before slicing into wedges. This could take a couple of hours. 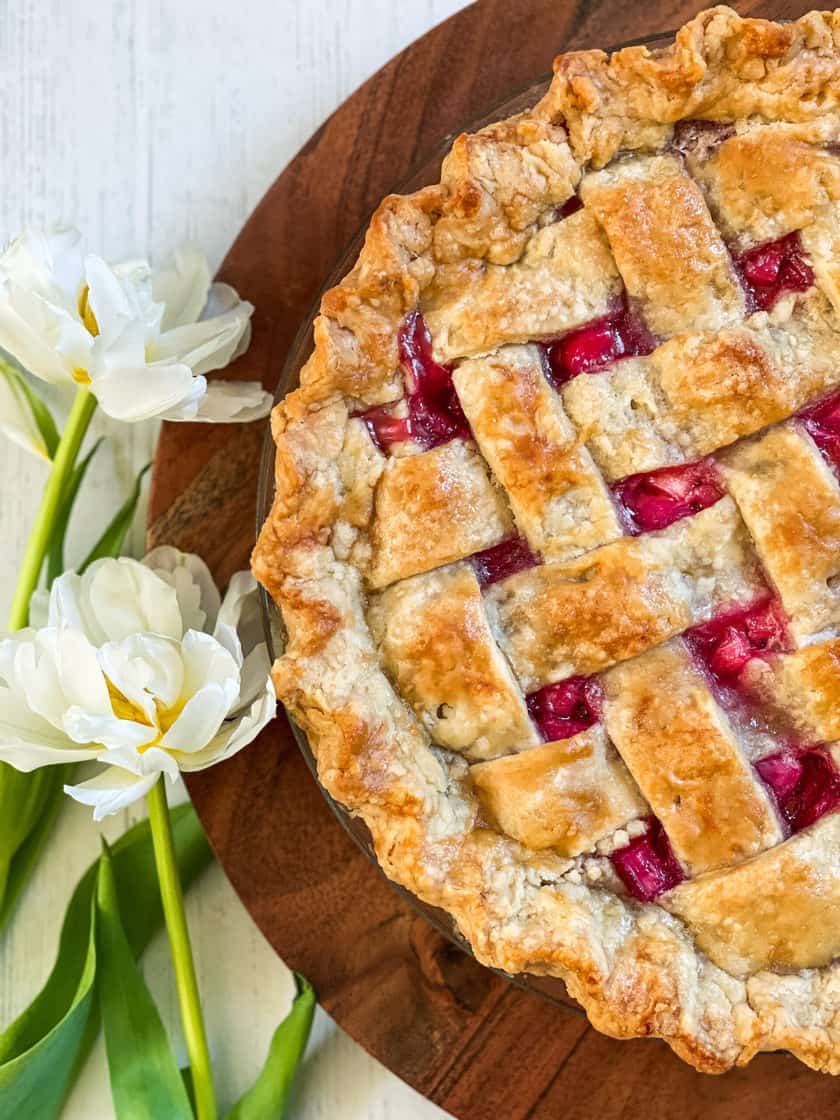 While slices of rhubarb pie are delicious on their own — a scoop of vanilla ice cream is almost a requirement!